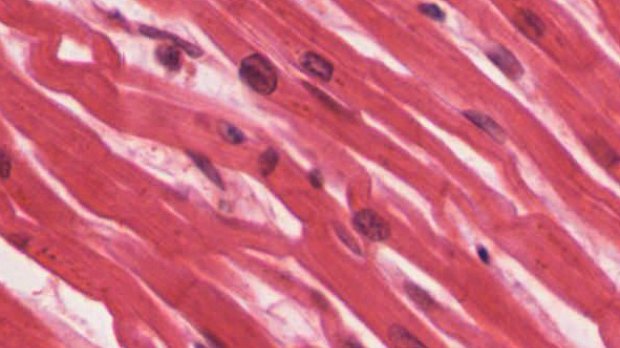 WIKIPEDIA, REGENTS OF UNIVERSITY OF MICHIGAN MEDICAL SCHOOLCells in the heart expressing the marker cKit were once thought to be the key to cardiac regeneration. These cardiac precursors, researchers found, could proliferate—opening up the opportunity for a way to regrow an organ that until this century was thought incapable of regeneration.

But even as positive results shook out of an early stage clinical trial, a shadow moved in over cKit+ cells, with several labs producing data questioning their reparative powers. Skepticism culminated with a report in 2014 showing that cKit+ cells in mice very rarely produce new heart muscle cells, or cardiomyocytes. The story of cKit+ cells, said Joshua Hare of the University of Miami Miller School of Medicine, “is a very controversial one.”

In the latest development in the cKit+ saga, published this month (October 5) in PNAS, Hare’s team found that cKit+ cells readily become cardiac...

Specifically, the researchers found that if they interfered with bone morphogenetic protein signaling—crucial during the development of the heart and other tissues—mouse induced pluripotent stem cells (iPSCs) expressing KIT would become cardiomyocytes. They also demonstrated with genetic fate-mapping that cKit+ cells derive from the neural crest during development and are present in the mouse embryonic heart.

Hare’s group did not find that cKit+ cells have a high propensity to become endothelium, as did the aforementioned 2014 study, which also used genetic fate-mapping. Jeffery Molkentin of Cincinnati Children’s Hospital Medical Center who led that work declined to be interviewed for this story. Hare said the discrepancy could be due to the teams’ different genetic constructs.

Bernardo Nadal-Ginard, an honorary professor at King’s College London whose work has supported the myogenic capacity of cKit+ cells, said he found the evidence from Hare showing they can become myocytes “convincing.” However, he added, “the paper claims the quandary and the dispute is over. But, unfortunately, it is not.”

The paper is more qualitative than quantitative, said Nadal-Ginard, meaning researchers still don’t know how often cKit+ cells become myocytes and whether they become other types of cells (and at what frequency).

Michael Kotlikoff of Cornell University pointed out that Hare’s team didn’t demonstrate that cKit+ cells in vivo have the same regenerative capacity as the iPSCs in vitro. “They never show the myogenic potential of those cells and don’t show them giving rise to cardiomyogensis” in vivo, Kotlikoff told The Scientist. “The expression of [cKit], per se, is not sufficient to identify cells as precursors and the further presumption that signaling processes observed in in vitro differentiation experiments limit such cells from undergoing myogenesis in the adult heart, the stage at which clinical regenerative efforts are focussed, is not supported by data,” he added in an email.

Hare is involved in two planned clinical trials that will administer cKit+ cells to patients with heart failure. (He founded a company called Vestion that is developing cardiac cell therapies.) Already, a phase 1 trial called SCIPIO, which Hare was not part of, found positive signs of tissue repair among patients given their own cKit+ cells. But as questions were raised about the regenerative abilities of these cells, some advocated to wait on the clinical trials until the biology was worked out. Hare said his study does not explain SCIPIO’s results; rather, it offers some clues as to how researchers can boost the reparative potential of these cells.

“To say human trials should be stopped because the experiment didn’t work in the mouse is a bit aggressive,” said Brigham and Women’s Hospital’s Piero Anversa, a leading proponent of cKit+ cells who was involved in SCIPIO and who also found Hare’s results convincing. (Anversa’s own work in the field has been a source of controversy, with an expression of concern issued about some SCIPIO results.) “The answer is going to be in the trial. If the trial goes well we win, if the trial doesn’t go well, we lose.”