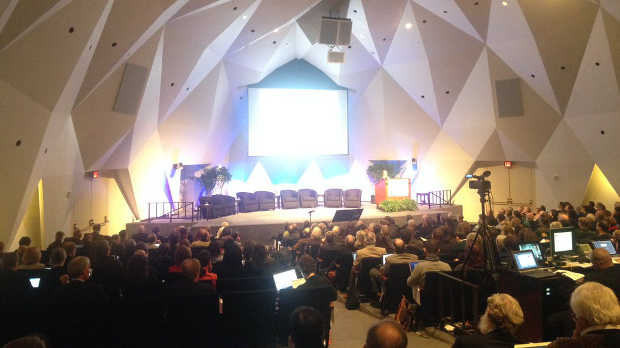 Researchers gather in the National Academy of Sciences auditorium for first day of the Human Gene Editing Summit on December 1.JEF AKSTMore than 400 scientists, bioethicists, and historians from 20 countries on 6 continents have gathered this week in Washington, DC, for the Human Gene Editing Summit. The attendees are a veritable who’s who of genome editing: Jennifer Doudna of the University of California, Berkeley, Emmanuelle Charpentier of Max Planck Institute for Infection Biology, and Feng Zhang of the Broad Institute of MIT and Harvard—the three discoverers of the CRISPR-Cas9 system’s utility in gene editing—plus dozens of other big names in genome science. Cal Tech’s David Baltimore along with the heads of the four national societies hosting the meeting (US National Academy of Sciences, US National Academy of Medicine, Chinese Academy of Sciences, and the U.K.’s Royal Society) provided opening remarks on Tuesday (December 1). And as I sat stage...

Church was scheduled to speak at a session later that afternoon about the application of CRISPR and other new precision gene editing techniques to the human germline—a hot-button topic since April, when a Chinese group published it had successfully modified the genomes of human embryos, and the National Institutes of Health (NIH) said it would not fund such research. Then in September, the U.S./U.K.-based Hinxton Group, an international consortium of scientists, policy experts, and bioethicists, said it supported the use of genetic editing in human embryos for limited applications in research and medicine.

But the debate continues, as opponents of the technology’s use in the human germline cite the near-term feasibility of “designer babies.” Three different speakers referenced a particularly chilling work of literature, starting with Baltimore, who chaired the Summit Planning Committee. “Aldous Huxley, in his book Brave New World, imagined a society built on selection of people to fill particular roles in society with environmental manipulation to control the social mobility and behavior of the population,” he said in his opening remarks on Tuesday morning (December 1). “The warning implicit in his book is one that we should take to heart as we face the prospect of this new and powerful means to control the nature of the human population.”

Some speakers said the controversy surrounding gene editing was reminiscent of the hubbub over recombinant DNA in the 1970s, when researchers first learned how to cut and paste genetic code, albeit very inefficiently (with a one-in-a-million chance of introducing desired DNA in a desired location). Some even drew parallels between the Human Gene Editing Summit and the 1975 Asilomar Conference on ensuring the safety of recombinant DNA techniques and other biotechnology, where a group of experts wrote regulatory guidelines that still affect the development of new technologies today.

But later sessions on the science underlying the new gene-editing techniques engendered excitement that overshadowed much of the concern expressed in earlier talks. Precision gene editing is cheap, efficient, and easy to use, said Charpentier; it can edit multiple genes at once, and it can make specific changes to the epigenome in addition to the DNA sequence. “It’s a very powerful technology.”

There’s still plenty of room for improvement, however. While CRISPR’s precision represents a vast improvement on the crude methods of the past, it still has off-target effects that pose problems for patient safety and the efficiency of CRISPR research. But researchers are already working on the problem. As Zhang attended the summit in DC, Science was releasing his group’s demonstration of one option to improve the specificity of the system: alter Cas9’s charge so it binds less tightly to mismatched DNA.

Researchers at the summit also discussed the need to continue exploring other CRISPR systems, a natural component of bacterial defense against viral infections. In the last few months, scientists have uncovered four new Cas proteins that may expand the gene editing toolbox. Charpentier and others added that they must begin to develop and refine efficient delivery methods to bring the CRISPR components to their target genes in the nucleus of the cell.

Once the kinks are worked out, the question will be: “How if at all do we as a society want to use this capability?” Baltimore said. When it comes to editing somatic cells, Harvard Medical School’s George Daley predicted the “imminent” use of CRISPR/Cas9 in gene therapies, which are rapidly approaching the market. Researchers could edit the HIV receptor gene CCR5 to make T cells that are resistant to infection, for example, or correct mutated genes that are causing disease—therapies that are already progressing through clinical trials based on other, less-efficient, gene-editing techniques.

When it comes to germline editing—the more ethically vexing application of CRISPR and other precision gene editors—Daley described a spectrum of moral acceptability. Most researchers and clinicians agree that “designer babies,” with parents able to select detailed physical traits, improve intelligence, or extend the lifespan of their children, is unethical and crosses an unspoken line. At the same time, many strongly support the eventual use of CRISPR to correct disease-causing mutations in embryos. Regulation of the technology, whether it be through governmental guidance or legislation, will likely land somewhere in the middle.

Despite the challenges that lie ahead, the researchers gathered at the Human Gene Editing Summit, which continues through today (December 3), are excited to see what the future holds. “We could be on the cusp of a new era in human history,” Baltimore said. “Although gene editing is in its infancy today, it is likely that the pressure to use gene editing will increase in time, and the actions we take now will guide us into the future.”

Update (December 4): Members of the Organizing Committee for the International Summit on Gene Editing yesterday released their official report from the meeting. While they support the integration of CRISPR and other precision gene editing techniques for somatic cell–based gene therapies that are “intended to affect only the individual who receives them,” they conclude that “[i]t would be irresponsible to proceed with any clinical use of germline editing unless and until (i) the relevant safety and efficacy issues have been resolved, based on appropriate understanding and balancing of risks, potential benefits, and alternatives, and (ii) there is broad societal consensus about the appropriateness of the proposed application.”

Editor’s note (December 31): After this article was published, George Church contacted The Scientist to discuss the way the media and prize-awarding committees have portrayed contributions to CRISPR.