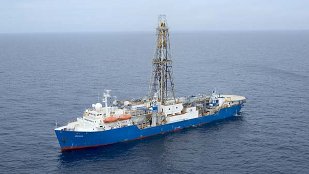 The JOIDES Resolution drilling vesselIODP-USIOTiny fissures in 3.5-million-year-old rock hundreds of meters below the seabed are home to microbes that gain their energy from the rock itself, according to a paper published in Science today (March 14). The study suggests that the largest ecosystem on the planet depends on energy, not from the sun, but from chemical reactions.

“The fact that you can get viable microbes out of those rock samples—and they’re clearly indigenous; they’re not contaminants—that’s just tremendously exciting,” said Andy Fisher, a professor of earth and planetary sciences at the University of California, Santa Cruz, who was the lead scientist on the drilling vessel.

The oceanic crust of volcanic-derived basalt rock lies below the sedimentary seabed, covers approximately two thirds of the Earth’s surface, and is on average 7 kilometers thick. Although scientists have found evidence of life within this vast expanse of rock, the...

In 2004, Lever joined the crew of the drilling vessel JOIDES Resolution, along with Fisher and other scientists from different disciplines, as part of an Integrated Ocean Drilling Project expedition. The crew drilled into the Juan de Fuca ridge flank, which lies approximately 300 kilometers from the southwestern coast of British Columbia. After descending 2.6 kilometers below the waves, the drill penetrated 265 meters of sediment before reaching the earth’s crust. It then drilled a further 300–400 meters into the basalt rock.

The thick layer of sediment “acts like a blanket” to keep the relatively young crust warm, around 64°C, explained Damon Teagle, a professor of geochemistry at Southampton University in the UK, who was not part of the team. It also largely prevents seawater from entering the rock from above, he said. There is, however, horizontal flow of water through the rock from distant sediment-free entry points created by small seamounts. But, by the time that water has reached the site where Lever’s rock samples were collected, “it’s suggested to be over 10,000 years old,” said Lever. The water in the samples is also free of oxygen and chemically quite distinct from seawater due to the filtering effect of passing through rock.

On board the ship, Lever washed the rock samples in sterile water, flame-sterilized them, broke them open with a sterile hammer and chisel, and took samples from tiny fissures that ran through the rock. To avoid the possibility of contamination with other microbes, Lever explained, “I exclusively focused on fine internal veins within the rocks that had remained firmly glued together by clay minerals during the core recovery [and] avoided all vein surfaces that had been broken open and thereby exposed to drilling fluid.”

The presence of microbial genes and characteristic rock chemistry was not sufficient to confirm the existence of life, however. “The sulfur and carbon isotopes that were analyzed could, in theory, have been produced thousands or millions of years ago,” said Lever, and the microbial DNA could have been from fossils. But, he added, “we didn’t just find DNA.”

The team also found that rocks incubated for several years under conditions resembling the crustal environment exhibited rising methane levels. “[It’s] evidence that [the microbes] are active and directly gaining energy from reactions with the rocks,” Lever said.

So far, the samples were extracted from just one geographical location, but Lever is keen to discover how widespread such methane and sulfur-metabolizing basalt life forms are. It will also be important “to understand the function and activity of this vast biosphere,” said Katrina Edwards, a professor of biological and earth sciences and environmental studies at the University of Southern California, who was not involved in the study. Given its scale, it will have “profound implications for our understanding of life on the planet,” she said.