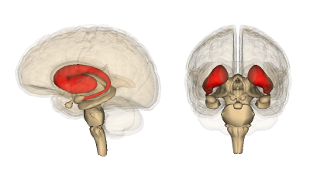 WIKIMEDIA, LIFE SCIENCE DATABASECertain neurons in the human striatum—a brain region involved in movement and cognition—are renewed throughout life, according to a study published today (February 20) in Cell. At one time, researchers thought that human neurons regenerated in fewer brain regions than in rodents and nonhuman primates. Now it appears that regenerated neurons simply show up in different brain regions in humans compared with other mammals—a findings that has potential implications for the origins of learning and other higher-order cognitive processes.

“New neurons are integrated in another part of the brain in humans,” said Jonas Frisén, a neuroscientist at the Karolinska Institute in Sweden and a coauthor of the paper. “There’s a unique pattern of neurogenesis in humans compared to other animals.”

“This is the clearest demonstration that [adult neurogenesis in the striatum] is happening in humans,” said Arnold Kriegstein, a developmental neurobiologist at the...

“It is clear that we are much less dependent on olfaction—and have a less developed sense of smell—than most other mammals,” Frisén explained in an e-mail to The Scientist. “In contrast, we of course have much more advanced cognitive plasticity and adaptability, and it is tempting to consider the possibility that new neurons in the striatum may contribute to such functions.”

Frisén’s team used several techniques to determine whether neurons in the striatum were present from birth or arose during adulthood. First, the researchers analyzed published human brain transcriptome data, as well as postmortem brains, finding that markers of neuroblasts were elevated in the striata in brains of a various ages, as well as in the SVZ and hippocampus. The researchers also analyzed postmortem neurons for accumulation of lipofuscin, a pigment that builds up in neurons as they age. They found that cells with neuroblast-related markers tended to have little to no pigment buildup, confirming their newness.

The researchers also analyzed tissue from the brains of deceased cancer patients. Cancer patients are sometimes given iododeoxyuridine (IdU), a molecule that is incorporated into DNA, in an attempt to sensitize malignant cells to radiation therapy. The researchers found elevated IdU levels in parts of the striatum and the hippocampus, indicating that some cells in these brain regions had originated during cancer therapy.

Finally, the researchers analyzed postmortem brains using nuclear-bomb-test-derived 14C dating, a technique Frisén and colleagues pioneered around a decade ago. Above-ground nuclear testing proceeded rapidly in the 1950s and early 1960s, spewing 14C into the atmosphere. Following a ban of above-ground nuclear testing in 1963, concentrations of 14C have declined at a predictable rate. Assessing the concentration of 14C incorporated into genomic DNA can determine a cell’s time of birth. The 14C data from brains of a range of ages indicated that interneurons in the striatum were regularly replaced. Exceptions to this phenomenon were found in the postmortem brains of people who had advanced Huntington’s disease, a neurodegenerative disease affecting the striatum. These organs displayed few or no neurons in the striatum that were formed during adulthood.

Taken together, the team’s results are convincing, said Hongjun Song, a neuroscientist at Johns Hopkins University in Baltimore, Maryland. “They’re actually using many technologies which are not easy to do and they’ve done it in one study, which is quite extraordinary.”

Kriegstein suggested that researchers should next look more closely at neuronal renewal in the striata of other animals. “It will be important to take a look at the striatum of nonhuman primates, which presumably would have a similar thing going on in adulthood,” he said. If widespread neuronal regeneration in the striatum is found in experimental animals, they might prove to be fruitful tools for studying the phenomenon. If it turns out that neuronal replacement in the striatum shows a unique pattern in humans, it could help explain cognitive differences between humans and other species.

Eventually, Frisén and his colleagues’ findings could impact regenerative medicine research and the treatment of neurodegenerative diseases. Kriegstein noted that researchers might even manipulate the SVZ to produce a greater variety of cells than just striatal interneurons. Perhaps someday progenitor neurons produced in the SVZ could be prodded to migrate in various directions and repair a variety of brain injuries and degenerations.

For now, the researchers seek an improved understanding of striatal interneurons and the role adult neurogenesis might play in the function of the brain, Frisén said.

“I think it will be a very important study for the whole field,” said Song.