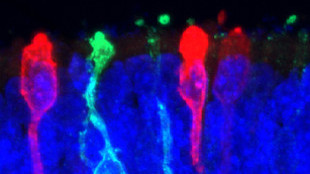 Photoreceptors derived from human iPS cells X. ZHONG. C. GUTIERREZ AND M.V. CANTO-SOLER AT THE WILMER EYE INSTITUTE, JOHNS HOPKINS UNIVERSITY SCHOOL OF MEDICINEResearchers have taken another step toward creating a functional human retina in the laboratory. Previous studies showed that an early-stage retina, including photoreceptors with primary cilia and parts of the inner segment structure, can be generated in culture from induced human pluripotent stem cells (iPSCs). Now, in a paper published today (June 10) in Nature Communications, Maria Valeria Canto-Soler, director of the retinal degeneration research center at Johns Hopkins University and her colleagues demonstrate the ability to grow the most mature retinal tissue from iPSCs yet: the in vitro product was able to develop functional photoreceptor cells.

“The major advance here is the ability to make retinal cells that can respond to light and that form into what appears to be remarkably proper orientation,”...

The miniature human retinal tissue was able to form the outer-segment discs that are essential for light-sensing and contained all seven retinal cell types, including the four types of photoreceptor cells that express opsins, the transmembrane proteins that transfer captured photons into a physiological sensory response to light.

While others have also developed systems to study the human retina in the lab, the current study extends these capabilities, according to coauthor David Gamm, director of the McPherson Eye Research Institute and an associate professor of ophthalmology at the University of Wisconsin, Madison. “Outer segments, which are the business end of photoreceptors, have not been previously shown to form from scratch in culture. This study is important as it demonstrated the extent to which we can study the retina in a culture dish,” said Gamm.

“This is a beautifully performed set of experiments to show that human iPSCs are capable of forming retinal cells that follow the expected developmental time course,” said Andrea Viczian, an assistant professor of ophthalmology at the State University of New York Upstate Medical University, who was not involved with the work.

Study coauthor Xiufeng Zhong, a postdoctoral fellow at Johns Hopkins, cultured human iPSCs in a defined neural differentiation medium and attached them to a Matrigel-coated dish, tracking their gradual differentiation from pluripotency to neural progenitors and into retinal progenitors. Zhong and colleagues found that the development and self-organization of these cells into retinal tissue paralleled that of in vivo retinal development—according to assessments of molecular markers assessment, histology, and timing—and that the tissue could be maintained for more than 200 days.

At the equivalent of a 28-week fetal retinal development, when the cells showed formation of outer-segment discs, the researchers pulsed light to individual photoreceptor cells and recorded the responses using electrodes. They were able to show that the cells had a biochemical response to light similar to that of photoreceptors of the human eye.

“The stem cells could build up the retinal structure almost autonomously. Somehow the cells knew what to do and we just needed to give them time to do it,” said Canto-Soler. “This was really surprising.”

“The major lessons that [such] stem cell studies are leading us towards is that there are intrinsic instructions within the stem cells themselves to build tissue,” said Conklin. “We really don't know about these yet, but they are revealing themselves—if we are careful enough to observe them.”

“It makes our jobs as tissue engineers much more doable,” he added, “if we are working with cells that have these intrinsic emergent properties to build tissues.”

The researchers will now try to push the system into further tissue maturity and also go beyond observation to the mechanisms of mature retina formation. “Knowing the mechanism in greater detail will allow us to improve the retinal differentiation process, making it more safe, reproducible, and user-friendly for both disease modeling and drug testing and for clinical transplantation into patients,” said Gamm.

That retinal photoreceptor tissue can be generated in the lab implies that researchers may be able to use this tissue for regenerative medical applications down the line, said Conklin. Currently, clinical trials are testing whether retinal-pigmented epithelial cells grown from human stem cells can be transplanted into those with retinal degeneration to improve or restore sight. But for those patients who have disruptions of the photoreceptors rather than the epithelium, such cellular therapies may not work. The current study’s demonstration that functional photoreceptor cells can also be made in the lab opens up additional opportunities for treatment of a whole new class of retinal disorders, said Conklin.

Still, Canto-Soler remains cautious. “This is a powerful system that will help us understand retinal diseases and develop treatments,” she said. “But there is still a long way to go before we can directly apply this to patients.”