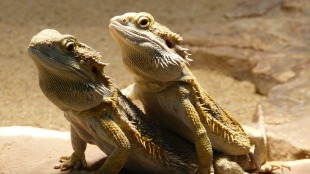 PIXABAY, 7854The sex of some animals, including humans, is dictated by genetics. Others are influenced by environmental conditions, such as temperature. Certain lineages appear to have flipped from genetic- to thermal-based sex determination over the course of evolutionary time, but no experimental data have shown exactly how these transitions occurred. Now, researchers have caught a real-time glimpse of a sex-determination switch in bearded dragons (Pogona vitticeps) native to Australia.

About one-fifth of wild-caught female lizards carried the male sex chromosomes (ZZ), according to a study published in Nature today (July 1), and these animals were able to mate and produce offspring whose sex was determined by the temperature at which the eggs were incubated. The findings suggest that sex reversal—the development of females with male chromosomes—may be a mechanism for the transition from a genotypic to a thermal-based mode of sex determination in a population.

Arthur Georges of the Institute for Applied Ecology at the University of Canberra and his group had previously shown that P. vitticeps can undergo sex reversal, in which an egg carrying the chromosomes of a male (ZZ) can become phenotypically female when incubated at the right temperature. But whether this occurred in nature, and whether it could cause a transition from genetic to thermal sex determination in a population, was unknown.

To find out, researchers collected blood samples from 131 bearded dragons in the wild, determined their sex from morphology, then used PCR to resolve their sex chromosomes. Among the lizards, Georges and his colleagues identified 11 sex-reversed females, which, despite carrying the male ZZ genotype, had female anatomy. Taking a number of animals back to the lab, the group discovered that not only did the ZZ females mate with ZZ males, but—much to the scientists’ surprise—they produced nearly twice as many offspring as ZW females.

“It’s bizarre that the best females are actually genetically male,” said lead author Clare Holleley, a postdoc at the Institute for Applied Ecology. “That was something we really didn’t expect to observe.”

The ZZ male–ZZ female mated pairs could have both male and female offspring: at low temperatures, the eggs developed into males, and at high temperatures they became sex-reversed females. “What this paper has shown is that that temperature override of the sex chromosomes actually does occur in the field,” said Shine. “And it massively and instantaneously changes the sex-determining system in a local population. You eliminate the sex chromosome in a single generation.”

The results raise the possibility that the P. vitticeps population could transition to entirely thermal sex determination. Indeed, from 2003 to 2011, the researchers found an increasing proportion of ZZ females, but the trend was not significant. “They’re showing this happens in nature, that it happens in multiple populations, and, interestingly, over an eight-year course of study it’s happening more and more,” said Nicole Valenzuela, an evolutionary biologist at Iowa State University who did not participate in the project.

If the population is transitioning, that raises the question of how the lizards will be affected in the long run as climates continue to change. One concern is that the offspring of sex-reversed females have a lower temperature threshold for sex reversal themselves—a phenomenon that could lead to an excess of females in warm years. “That was an adaptation no one would have predicted,” Blanche Capel of Duke University told The Scientist. “Will this really evolve to produce stable, unbiased sex ratios so the species will be safe from extinction?”