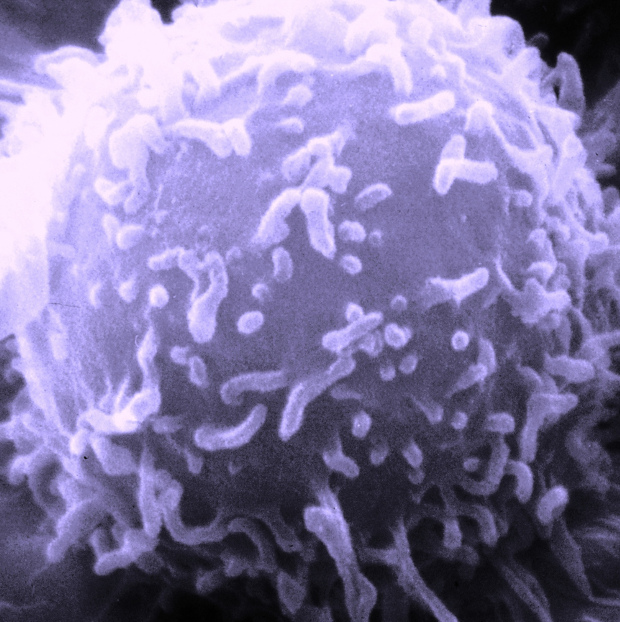 Scanning electron microscope image of a human lymphocyteWIKIMEDIA, NCIFollowing genetically marked donor memory T cells infused into hematopoietic stem cell transplantation patients, a team led by researchers at the University Vita-Salute San Raffaele in Milan, Italy, found that two types of less-differentiated memory T cells can persist for up to 14 years. The team’s results, published today (December 9) in Science Translational Medicine, demonstrate that the survival of these immune cells depends on the type of memory T cells initially introduced into patients, and whether these cells continue to encounter antigens over time.

“This was a really elegant and thorough study in people confirming some of what we already knew from mouse studies,” said immunologist Lewis Lanier of the University of California, San Francisco, who was not involved in the work.

“This is one of the most thorough studies using diverse clonal tracking technologies to analyze the...

Part of the adaptive immune system, memory T cells are generated from naive T cells; these specialized immune cells monitor reappearing antigens. Because it is difficult to longitudinally track antigen-specific clones in patients, most of what was previously known about memory immune cells had been found in mice.

At least one human study previously demonstrated that genetically modified T-cells could survive in circulation for at least a decade in humans. Researchers have also been able to identify three types of memory T cells—effector, central, and most recently, human T memory stem cells. Yet which cells are most important for maintaining long-term immune memories, and what factors are necessary for their maintenance, remains unclear.

For the present study Chiara Bonini of Vita-Salute San Raffaele and her colleagues monitored the presence of genetically marked donor T cells initially infused into 10 clinical trial participants following allogenic stem-cell transplants. These tagged T cells could be distinguished from the patients’ own T cells reconstituted from the stem cell transplants using two genetic markers. The team analyzed patient blood samples annually, tracking clones of the infused cells and their progeny using the distinct markers as well as unique integration sites of the retroviral vector used to engineer the cells.

“We know from following those vaccinated in childhood that memory T cells can be long-lasting, but which of these cells have the highest ability to expand and continue to mediate immune responses in vivo is still a question,” Bonini told The Scientist.

All three types of infused memory immune cells with varying antigen specificities persisted at a low but consistent level for up to 14 years in patients, the researchers found. The relative levels of these cells were similar to the cells generated by the patients’ reconstituted immune systems, suggesting that the engineered cells behaved in the same way as non-engineered immune cells.

“The researchers provide evidence that, after stem cell transplantation, the long-term maintenance and T cell subset composition in the blood is comparable to that of healthy donors, which validates their findings,” said Gattinoni.

The team found evidence to suggest that antigen exposure helps maintain these immune cells’ memories. The most abundant T cells—and the ones that survived the longest, more than a decade—were those that were identified as stem and central memory T cells at the time of the initial infusion. “We observed that the degree of expansion and persistence is different for these three subpopulations, and were the highest for stem memory T cells” said study coauthor Giacomo Oliveira, a postdoctoral fellow in Bonini’s lab.

The results suggest that for T cell–based immunotherapies, treatments that promote the production of T memory stem cells could result in the most durable and effective treatments. “Now we would like to introduce tumor-specific T cell receptors or chimeric antigen receptors into the memory stem T cells and test their efficacy in the clinic,” Bonini said.

Lanier is skeptical, as results from mouse studies suggest that stem-specific memory T cell markers may not influence the cells’ longevity, he said. Still, Gattinoni is excited about the results. “They strongly support what we have been thinking about for a while—that immunotherapy for cancer and [bacterial and viral] infections should consist of T cell populations enriched in T memory stem cells.”