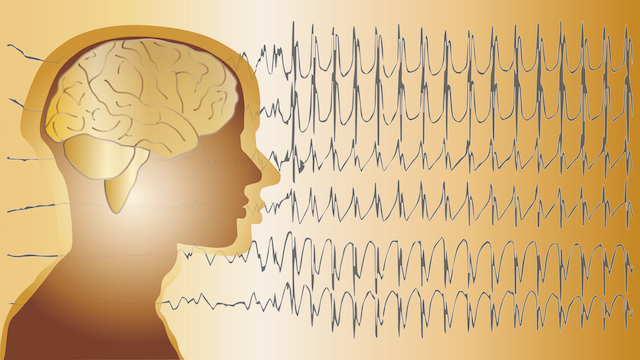 Centuries ago, humans believed that seizures were tied to the lunar cycle. Although scientific evidence for this association is scarce, physicians have long suspected that temporal patterns connected with epilepsy may exist. These days, the condition’s link to our sleep-wake cycles, or circadian rhythms, is well-documented, primarily through observations that seizures are more prevalent at night or tend to occur at specific times of day. Scientists now report the existence of seizure-associated brain rhythms with longer periods, most commonly within the 20- to 30-day range, in a study published today (January 8) in Nature Communications.

“People have made these observations since antiquity and have wanted to speculate and explain these oscillations for a long time,” study coauthor Vikram Rao, a neurologist at the University of California, San Francisco, tells The Scientist. “But only recently [have we gotten] the tools that might allow us...

Rao and his colleagues analyzed data collected from one such tool—the NeuroPace device, an FDA-approved, implanted brain stimulator that continuously monitors neural activity and sends electrical pulses when a seizure is imminent. It acts, in some sense, like a “pacemaker for the brain,” Rao says.

For epilepsy, [this study] has a very strong impact—because it shows that the seizures do not appear randomly, at least in patients with a low probability of seizures.—Christophe Bernard,
Aix-Marseille University

The device detects and records both seizures and interictal epileptiform discharges, pathological brain activity associated with these events, using electroencephalography (EEG). “In between seizures, we see electric discharges that signify irritability of the brain and a propensity to have seizures,” Rao explains. “It’s like seeing sparks from a match, where you say, wow, that looks like there’s potential for a fire but it’s not the fire itself.”

Because epileptic individuals implanted with this device can live at home, the team was able to collect data from 37 patients (22 men and 15 women) for durations that ranged from three months to more than nine years.

This dataset revealed that the seizure-related brain activity was fluctuating on both a daily basis, confirming the existence of circadian patterns, and over a longer period—ranging from five to 33 days—with the most common length being 26 to 30 days. In addition, the researchers observed that, particularly in individuals with low seizure rates, the chances of an episode increased near the peak of both circadian and multi-day rhythms. Combining the two patterns provided the best estimates of risk.

“For epilepsy, [this study] has a very strong impact—because it shows that the seizures do not appear randomly, at least in patients with a low probability of seizures,” says Christophe Bernard, a neuroscientist at Aix-Marseille University in France who also was not involved in the research. “This is really important, because that opens a new field of investigation—why do seizures cycle like this, and why is interictal activity oscillating that way?”

He adds that one limitation of the study is that the NeuroPace system is hardwired to only track EEG signals around seizures rather than to continuously record neural activity.

The mechanism controlling these rhythms is still a mystery. In the past, researchers have documented the existence of catemenial epilepsy—seizures apparently tied to menstrual cycles that some scientists believe relate to changes in hormones such as progesterone and estrogen. However, Rao says, this phenomenon cannot explain his findings, because the multi-day rhythms appeared in both genders and some of the women’s rhythms did not line up with their menstrual cycles. Still, hormones are one potential mechanism behind these slow oscillations, he adds. “The real answer is that we don’t know.”

These results could help physicians better forecast when patients—at least those who have such devices implanted—are at risk of seizures, says coauthor Maxime Baud, a epileptologist at the University of Bern in Switzerland. This could potentially change patients’ lives, he adds, allowing them to better plan for the future, such as “choosing to go on a weekend trip when the seizure risk is lowest and staying at home and resting when the risk is high.”

I believe that we will probably be able to show similar patterns in healthy people.—Mark Cook,
University of Melbourne

Mark Cook, a neurologist and biomedical engineer at the University of Melbourne who did not take part in this work, notes that these findings fit with his team’s previous observation of clustering seizures. In a 2015 Epilepsia study, for example, his team found similar rhythms using another implanted device. The key contribution of Baud and Rao’s study, according to Cook, is the length of the recording periods. “People presumed that these sorts of patterns might be altering continuously, which would limit their utility,” he says. “But, in fact, we can see that they’re very stable over long periods.”

These findings have another, perhaps more intriguing, implication, which is that these kinds of multi-day rhythms of brain activity might exist in healthy individuals as well. “I believe that we will probably be able to show similar patterns in healthy people,” Cook says. “How we'll acquire that information is another matter.”

Bernard says that if these slow cycles do indeed occur in the general population, they might have an effect on both the brain and, more generally, organ function. “For me, this is a typical example of a paper that provides a paradigm shift,” he adds. “This is a purely descriptive paper—there are no mechanisms—but sometimes, observations are more important than the mechanisms because they launch a new way of thinking.”