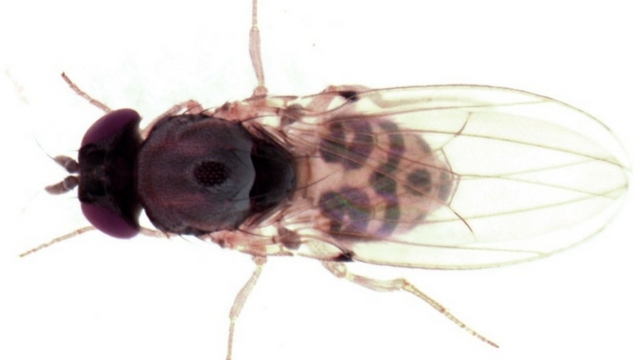 On a clear, cool day in mid-September back in 2012, John Jaenike and Thomas Werner maneuvered their way through the forested Tech Trails in Houghton, Michigan, to the mushroom and tomato fruit fly traps Werner had planted a few days prior. Jaenike, an evolutionary ecologist from the University of Rochester, poised his net over a trap that had enticed several Drosophila specimens—each no more than two to four millimeters long. He bent down to begin collecting. “Oh, cool, Drosophila neotestacea!” Werner recalls Jaenike exclaiming as he spotted the very species he planned to discuss during his seminar at Michigan Tech the next day. 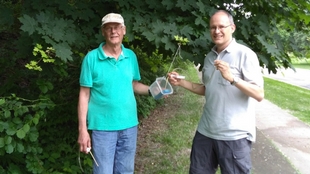 Werner and Jaenike doing field work near the University of Rochester, NY.

This was the duo’s first meeting in person. Werner, an evolutionary developmental geneticist at Michigan Tech, had struck up...

All that changed on that walk through the woods to visit the traps. “I just was struck by lightning,” says Werner. “This is unbelievable. There must be 50 species out here, and he just looks . . . with his naked eye and tells me what species he sees.”

Wanting to preserve Jaenike’s knowledge, Werner proposed that the two of them collaborate on a field guide; Jaenike would teach him how to identify species and Werner would take their pictures. Jaenike agreed. “I saw the incredible value of the content of his brain,” says Werner.

This spring, Werner and Jaenike published the first exhaustive field guide on fruit flies in the Northeastern U.S. within the last 96 years, an endeavor almost five years in the making.

“A lot of Drosophila people are uncomfortable identifying species,” says Jaenike. “One goal was to show people how to identify flies, the other was to show others the awesome variation that you might see.”

In their open-access book, Werner and Jaenike meticulously detailed 55 Drosophila species. Most of their descriptions are accompanied by high-resolution, three-dimensional images carefully stitched together by Werner from dozens of photographs each, thousands in total. 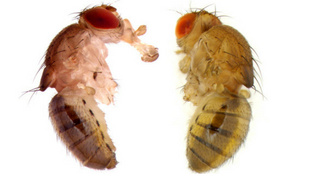 These images illustrate certain subtle distinctions between species, such as the midline stripe that splits in half along the thorax of D. busckii females, or the elusive lateroventral spot on D. subpalustris but not on D. palustris. For species that don’t yet have an image, Werner’s five-year-old daughter’s fly illustrations serve as cartoon placeholders.

“[Werner] was actually able to discover some traits that distinguish some closely related species,” says Jaenike, referring to the distinguishing spot on D. subpalustris. “That had never been noticed before.” According to Jaenike, Werner’s discovery gives researchers a simple means by which to distinguish D. palustris from D. subpalustris, similar species that can easily be confused for one another. 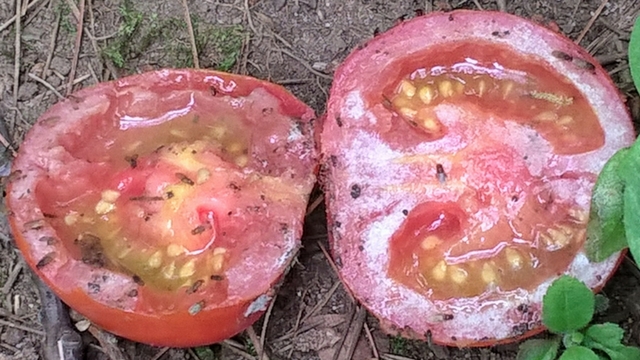 For scientists interested in capturing their own specimens out in the field, Werner and Jaenike outlined how to catch these flies, including food recipes to use as fly bait.

“I think this is really going to help us . . . get closer to the organisms and the systems that [we’re] studying,” says evolutionary geneticist Amanda Larracuente of the University of Rochester. She works on the commonly studied D. melanogaster and is a colleague of Jaenike’s. 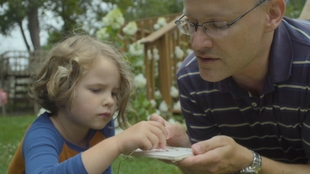 Werner and his daughter Natalia identifying flies caught in the wild.

Most of Larracuente’s work on D. melanogaster is with strains bred in the lab. “But, evolutionary questions, and sometimes, behavioral and ecology questions are better addressed by looking at the natural variation that exists in wild populations,” she says. “That’s what this guide gets to.”

Examining these natural differences “can really tell you something about the tempo and the mode of natural selection that affects genome evolution,” Larracuente explains.

In addition to encouraging study in wild populations, she says this guide will empower others to move beyond D. melanogaster. “The more species that you can get your hands on, the better you’re able to ask [these] evolutionary questions.” She hasn’t done that kind of work yet, but “having a tool like this will help us get out there and do it ourselves,” she says. 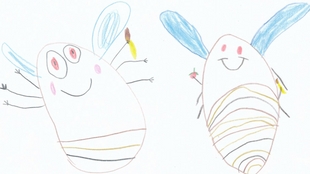 Cartoon flies, holding a banana (both) and a tomato (right)

John Pool, an evolutionary genomicist at the University of Wisconsin-Madison, agrees that the guide could help researchers branch out. He also works on D. melanogaster but does his own collecting, anywhere from his home in Wisconsin to countries in Africa. He’s interested in how this species evolved novel traits, such as changes in coloration, size, and environmental tolerances, in challenging environments. But “when you look across the diversity of Drosophila,” he says, there are many other species that have evolved their anatomy and biochemistry to thrive in different ecological niches. “[T]hat’s one thing that really stands out from reading the species descriptions in this guide.”

Others see the merit in sustaining Jaenike’s increasingly unique knowledge. “A lot of folks no longer have any training in field work,” says evolutionary biologist William Etges, who studies the genomics and ecology of desert Drosophila at the University of Arkansas. This, says Etges, is one of the biggest issues with how the Drosophila field has changed. “Very few people are still alive that know how to do this stuff . . . I’m afraid that a lot of this will just become a lost art.”

Entomologist David Grimaldi, curator of invertebrate zoology at the American Museum of Natural History and a past student of Jaenike’s, has independently published a fruit fly guide earlier this month (June 7). According to Grimaldi, the two guides are quite different: his is geared toward identifying species based on their genitalia, while Werner and Jaenike’s guide is a “much more in-depth summary of the biology of the species and species groups,” he explains in an email to The Scientist. Grimaldi considers Jaenike to be one of the world’s finest Drosophila biologists and referred to Werner and Jaenike’s guide as the one done “by the master.”

“These two guides I’ve wanted to see for 30 years,” says Grimaldi. “Without question these guides will be of enormous use to researchers and students studying the ecology, behavior, genetics of North American drosophilids.”

Insect enthusiasts will also benefit. “Anyone could find this guide engaging and useful,” adds Pool. “Fruit flies have never looked so good.”

Larracuente, Etges, and Grimaldi are acknowledged for their comments and suggestions in Werner and Jaenike’s guide.