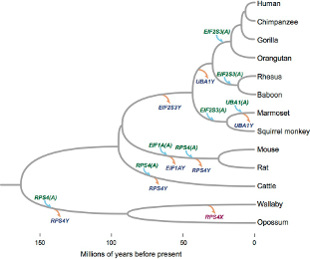 Autosome transposition events from Y chromosome among mammalsWHITEHEAD INSTITUTE, JENNIFER HUGHESThe mammalian Y chromosome has lost many hundreds of genes throughout evolution. Surviving Y chromosome genes were recently shown to have broadly important cellular functions, rather than male-specific roles, plus corresponding copies on the X chromosome. Following on a large survey of the evolution of the mammalian Y chromosome published last year, Jennifer Hughes, a research scientist in David Page’s laboratory at the Whitehead Institute in Cambridge, Massachusetts, and her colleagues now provide evidence to suggest that four presumably essential and highly conserved genes lost from the Y chromosome in several mammalian species—including humans—have been preserved in the genome through transposition onto autosomal chromosomes. The team’s results were published today (May 28) in Genome Biology.

This preservation of essential Y chromosome genes through transposition was previously thought to have occurred only in isolated cases,...

“This is an interesting story. It’s remarkable to see how consistently genes that were lost from the Y chromosome were rescued by autosomal copies in multiple species,” said Christine Disteche, who studies the regulation of mammalian sex chromosomes at the University of Washington and was not involved in the current work. “What is amazing is that this seemed to have happened independently in multiple lineages. That stresses how important this is.”

“The observations confirm the view that gene loss from the Y can be compensated for,” Jennifer Marshall Graves, a geneticist at La Trobe University in Melbourne, Australia, wrote in an e-mail to The Scientist. While this was known, she continued, “it’s nice to have good evidence of this process.” Graves, who was not involved in the present study, previously demonstrated the transposition of an ancient gene pair from both the X and Y chromosomes onto several autosomes in mammals.

Hughes and her colleagues last year found that evolutionary conserved genes necessary for cellular processes, such as protein translation, were missing from the Y chromosomes of certain mammalian species. Analyzing those same eight species, the researchers recently identified seven single-copy Y chromosome genes with cellular functions normally required by both males and females that were lost in one or more species.

The team found four of these genes on an autosome in species with the missing Y chromosome gene—presumably, the genes were transferred to the new chromosome through a retrotransposition event. The team identified eight instances of apparent retrotransposition, including in a few species in which such gene-jumping occurred more than once.

The EIF2S3Y (eukaryotic translation initiation factor 2 subunit) gene, involved in protein synthesis, was missing from the Y chromosome only among primates the team studied. “If this gene is so important, why does it appear to be dispensable in some species?” asked Hughes. So the researchers traced the gene to three different autosomal locations in each of the three primate groups (Old World monkeys, New World monkeys, and apes), which suggested that this gene transposed from the Y chromosome to an autosome and the X chromosome independently on three separate occasions.

Unlike in the New World monkey lineage, EIF2S3 expression in apes and Old World monkeys was restricted to the testes. While previous studies considered this autosomal copy a pseudogene, the current analysis provides evidence that the gene is indeed expressed and may be functional. Several years ago, this gene was shown to be one of just two Y chromosome genes required for assisted reproduction in mice. While not on the Y chromosome in primates, the gene is likely to be performing the same function during spermatogenesis and may be important in male infertility, Hughes and her colleagues suggested.

There have also been examples of X-linked genes relocating to autosomes. In the present study, the researchers found the first such example for the RPS4 (ribosomal protein S4) gene. The wallaby acquired two autosomal copies of this gene, which is now missing from both the X and Y chromosomes. “The X chromosome has undergone fewer changes,” Hughes explained. However, she added, “this shows that the X is also vulnerable to gene loss following these [transposition events].”

Graves said she believes the Y chromosome continues to evolve by losing genes with important functions. But Hughes stressed that the Y chromosome is not going to disappear. “Although the phenomenon of genes leaving the Y and relocating elsewhere in the genome is relatively common, when you look across all mammals, it is still a rare event.”