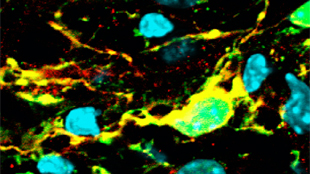 A new neuron reprogrammed from spinal cord astrocytesZHIDA SUThe spinal cord cannot make new neurons during adulthood, so if its supply is destroyed by disease or injury, the loss is permanent. But Zhida Su and his colleagues at the University of Texas Southwestern Medical Center have found a way to potentially solve this problem, at least in mice.

The researchers have developed a two-step method for transforming astrocytes—star-shaped support cells in the nervous system—into neurons, all in the bodies of living rodents. Although they have not yet shown that these new neurons actually work, “there is great potential for therapy,” said Chun-Li Zhang, who led the study. ”The spinal cord is one of the regions of the central nervous system where we can have the most direct impact.”

The study, published today (February 25) in Nature Communications, is the latest in a series of attempts to...

In 2012, Benedikt Berninger from Ludwig Maximillians University Munich showed that pericytes—a type of brain cell—could also be converted into neurons. And just last year, Olof Torper from Lund University made neurons from astroctyes in the brains of living mice, raising hopes that these transformations could be done without any need for invasive transplantations.

For the present study, Su’s team wanted to see if it could do the same in the spinal cord, which is populated by cells that are subtly different from those in the brain. Astrocytes make a good target because they are responsible for producing scars after spinal cord injuries. The scar protects the surviving neurons, but also secretes molecules that stop these cells from growing.

The team used viruses to deliver several possible reprogramming genes into astrocytes and found that just one, SOX2, was enough to convert these cells into neuronal precursors called neuroblasts. The technique worked both in cell cultures and in the bodies of living mice that had suffered severe spinal cord injuries, the researchers found.

Some of these neuroblasts went on to produce mature neurons. Su’s team managed to double the production of these cells using valproic acid, and showed that the newcomer cells formed connections with existing motor neurons.

The two-step process takes at least four weeks to complete, making it much slower than other approaches that’ve turned astrocytes straight into neurons. However, such direct conversions only make one neuron for every astrocyte. Neuroblasts can repeatedly divide to make neurons. “For each reprogrammed [cell], perhaps more than one new neuron could be generated,” Berninger wrote in an e-mail to The Scientist. “But this has not been formally demonstrated.”

Torper agreed. In an e-mail, he said that the team “needs to show some form of functional recovery in the mice.” He added: “It would also be interesting to have a deeper understanding of what type of neurons that are being formed and how well they correspond to the cells dying upon SCI [spinal cord injury].”

The technique is still inefficient. Only 3 to 6 percent of the astrocytes at the injection sites turned into neuroblasts, which is not enough to improve the rodents’ health, nor enough to properly investigate the cells with electrodes to see if they are truly functional.

“It’s just a proof of principle,” said Zhang. “We got some cells, but we’re not getting the number we really want for repair. We’re working at full force to boost the efficiency. Then we can do recordings to see if they have electrical properties.”

Meanwhile, Wernig expressed doubts about the team’s methods. He noted that Sox2 is typically expressed in neuronal precursors and actually prevents them from becoming neurons. “It does not make any sense that this factor should induce neurons,” he said.

Zhang acknowledged that SOX2 is found in spinal astrocytes, but at low levels. He said he suspects that raising these levels above a certain threshold is the trigger that reprograms the cells.