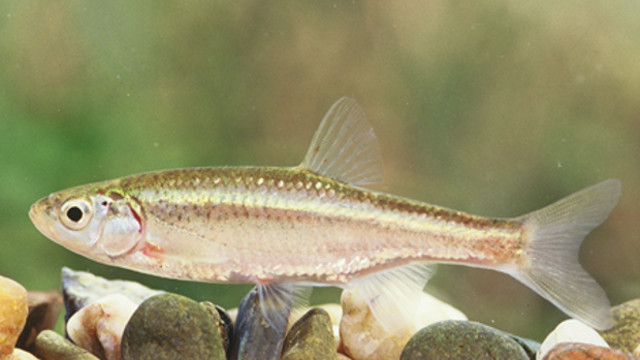 Squalius alburnoidesISABEL CATALÃOResearchers in Portugal studying a rare type of hybrid fish in the Ocreza River have found an individual that is the exact genomic match to his father. While such androgenesis—the reproduction of a male with no female genetic component—occurs in some non-vertebrates and has been induced in vertebrates artificially, today’s report (May 24) in Royal Society Open Science is the first known description of a vertebrate reproducing this way in the wild.

“I was very surprised,” said Miguel Morgado-Santos, a graduate student at the University of Lisbon in Portugal who co-authored the study. “I thought maybe it was a mistake and we had captured the father.” But, when the researchers examined the animal’s mitochondrial DNA, which can only be inherited from the mother’s egg, they found that it differed from the father’s. “So, it was definitely an androgenetic individual,” he said.

While the females of many species, including some vertebrates, are well known to be able to reproduce themselves without any input from a male—a process called parthenogenesis—“for a long time, biologists thought that clonal reproduction by males was impossible as they are not able to have babies,” said Ross. However, there are now known to be a handful of species—certain types of ants and fresh water clams, for example—where the “males basically use a surrogate mum to clone themselves,” she said.

Because there are so few examples of androgenesis, it is not always clear how the phenomenon arises. However, in some species the males are thought to produce sperm with twice the normal genetic content (diploid), and the genetic content of the egg is either absent or eliminated after fertilization. Alternatively, it’s possible that a normal sperm (haploid) can fertilize an egg with either an absent or eliminated genome and the male genome then replicates, or that two sperm can co-fertilize a genome-less egg. Which, if any, of these occurred in the fish is unknown, said Morgado-Santos.

“In a lot of these cases,” Ross said, “these bizarre types of reproduction seem to have arisen by two closely related species hybridizing at some point in their evolutionary history and something going really, really wrong with reproduction.” Hybridization often results in unmatched chromosome numbers, and consequent sterility of the offspring, she explained, so in essence the reproductive quirks provide a workaround.

Indeed, the fish that is the subject of the new research—Squalius alburnoides—is the result of a natural hybridization event between another fish, Squalius pyrenaicus, and a now extinct species of the lineage Anaecypris hispanica.

Members of S. alburnoides are an assorted mix of diploids, triploids and tetrapoids, meaning they carry different combinations and copy numbers of the two genomes of the originator species, explained Morgado-Santos. He and colleagues had been studying an isolated population of S. alburnoides in the hopes of figuring out the complexities of reproduction in these strange fish when, by chance, they found a male offspring that was an exact genomic replica of its father.

Although the event was clearly rare—just one offspring out of 261 analyzed—“even at a low proportion,” Morgado-Santos said, “this process could be important for hybrid speciation”—the emergence of a new species from the hybrid.

Indeed, said Tanja Schwander, who studies the evolution of reproductive systems at the University of Lausanne, “we don’t know how these strange reproductive systems evolve . . . and what the steps are from normal sexual reproduction to these unusual systems. These rare spontaneous cases could be a route.”

“Maybe they could increase [in frequency] gradually and then be coopted into obligate androgenesis,” she suggested, which would genetically isolate the male lineage and create a new species.

Asexual reproduction is ultimately a risky strategy for a species, as it reduces variation, which might explain the rarity of androgenesis in nature. “In the long term many of these species would go extinct,” Schwander said, but after all, “evolution doesn’t work with foresight.”

From one isolated androgenic event in S. alburnoides it is unclear how important this reproductive method is to these fish, but nonetheless, said Schwander, “It’s nice that [because of this paper] people will pay more attention to unusual reproductive modes . . . There are a lot more of them than one would think, but people just tend to ignore them.”