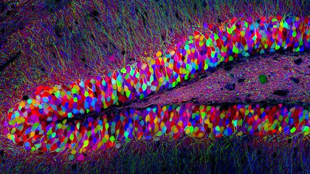 Eyewitness testimony has long been an important part of most judicial systems around the world. However, over the last three decades, psychologists have consistently proven how tenuous the memories truly are, and how easily they can be altered or even manufactured through the power of suggestion. Today (July 25), research published in Science provides the first clues regarding the mechanism for creating such faux memories in the brain, demonstrating that the manipulation of a specific subset of neurons in the mouse hippocampus can cause the animals to falsely remember a fear of a foot schock.

“[This] is a very striking investigation that provides clues about the neurobiological mechanisms that may underlie how we acquire false memories,” said Howard Eichenbaum, a neuroscientist at Boston University, who was not involved in the study, in an email.

In a previous study, neuroscientists led...

The researchers have now used the same optogenetic technique to essentially transfer a fear memory from one situation to another. They placed a mouse in a control environment (Box A) and monitored the animal’s brain activity to identify the hippocampal neurons that represented that location, then tagged those neurons with the light-sensitive protein. The next day, the team placed the mouse in a second environment (Box B), where it received electric foot shocks, while pulses of light activated the neurons that encoded the memory of Box A. Finally, the mouse was again placed in Box A, and when the researchers delivered light to the brain, the rodent displayed a heightened fear response, although no foot shock had ever been given in that location. The mice eventually became conditioned to the false memory, and would freeze in Box A even in the absence of pulsing light.

“They’ve found a nodal point in the [memory] network, where you can do a fine-grain manipulation that still has big enough consequences to create a new association in the brain,” said Loren Frank, a neuroscientist at the University of California, San Francisco, who was not involved in the study. “That really hasn’t been done before.” Frank noted, however, that the nature of the false memories was unclear. “There’s an open question as to what kind of memory is being created,” he said. “Is this an episodic memory or is this more like ‘here I am in a bad place,’ and not connected to a specific episode?”

Upon triggering the mouse’s false memories, the researchers found that a brain area located downstream of the hippocampus called the amygdala, which is integral to the fear response, showed protein expression levels consistent with neural activity induced by true memories. According to Tonegawa, this result suggests that the false memories “felt real” to the mice.

“The brain mechanisms for forming and recalling the false memories are not distinguishable from those underlying genuine memories,” said Tonegawa.

Tonegawa hypothesized that a similar mechanism could be behind the formation of false memories in humans and said the findings underscore the problematic nature of eyewitness testimony in court proceedings. According to a book called Seven Sins of Memory by Harvard University psychologist Daniel Schacter, an expert in the field of false memories, nearly three-quarters of the first 250 people exonerated on by DNA evidence in the US were originally convicted on the basis of eyewitness testimony. “We hope this kind of research will reinforce the need to look at eyewitness testimony carefully,” said Tonegawa, “so that innocent people will not be incriminated.”

Though the current research focused on the creation of false negative memories, Tonegawa said he thinks that false memories with positive connotations likely form in the same way—a hypothesis he hopes to test with future experiments. In addition, given that false memories appear robust enough to compete with real memories, Tonegawa said he plans to investigate the factors that affect the relative strengths of the two types of memory.