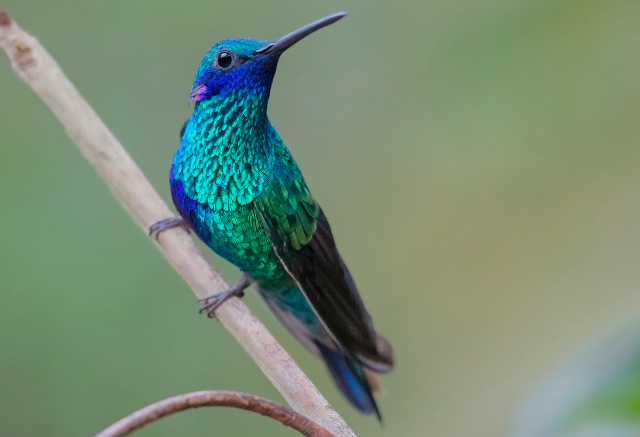 A sparkling violetear hummingbird, native of the Andean highlands.BRIAN ZWEIBEL Many more genetic changes can result in the same phenotype than previously suspected, according to a study of birds spanning 56 divergent species. Analyzing the structure and function of their hemoglobin proteins, Jay Storz of the University of Nebraska, Christopher Witt of the University of New Mexico, and their colleagues uncovered a wide breadth of mutations that all resulted in higher hemoglobin affinities for oxygen among birds living at high altitudes. The results were published today (October 20) in Science.

“This study is a beautiful look at the molecular basis of convergent evolution,” Joel McGlothlin, who studies evolution at Virginia Tech and was not involved in the work, wrote in an email to The Scientist. “Amazingly enough, there appear to be a huge number of different molecular routes to greater oxygen affinity, and birds seem to have...

“Other researchers have looked at examples of convergent evolution, but [these authors] have looked across a really wide taxonomic diversity in a single paper, which is really unique and unusual,” Jamie Bridgham of the Institute of Ecology and Evolution at the University of Oregon, who also did not participate in the study but who penned an accompanying commentary, told The Scientist.

Storz, Witt, and their colleagues sought to understand whether there are many different ways genes can evolve to the same hemoglobin function. The researchers collected 56 bird  species from the Andes and Rocky Mountains and sequenced the three genes that make up the hemoglobin subunits. Considering the species as 28 related pairs—one species that lives at high altitudes and one lowland species, the team found that, as expected, the high-altitude bird of each pair had a higher affinity for oxygen, but of the 28 high-altitude species, only four had the same amino acid changes.

Because few amino acid changes were thought to affect the hemoglobin protein’s oxygen affinity, researchers had assumed that the evolution of the underlying genes was predictable. But the authors of the new study unexpectedly found that many of these amino acid changes were not in the active site of the protein that interacts with oxygen.

“We were addressing whether genetic evolution is predictable and we found that evolutionary changes may be highly predictable at the at the level of biochemical phenotype, but that there can be far less predictability at the underlying genetic level,” Storz explained.

“An important implication of our work is that, for any given gene, the substitutions accumulated through evolutionary history determine the set of mutations acceptable or beneficial in the future,” said Storz. “The evolutionary mutation options available to one species may not be available to another.”

Both Bridgham and McGlothlin agreed that this study is particularly powerful because the hemoglobin system is relatively simple and the phenotype—oxygen binding—can be readily tested and quantified with reconstituted proteins in the laboratory. “The authors could ask how changes in DNA sequence translated into changes in function not only in living species but also in extinct ones,” McGlothlin wrote in an email to The Scientist. “Even more impressively, they could apply mutations to explore evolutionary what-if scenarios that would be impossible in many other systems.”

Bridgham would next like to see studies to understand whether these findings are generalizable to other proteins and range of other species, as well as to more complex traits involving a larger set of connected genes.

McGlothlin, on the other hand, is interested in the molecular changes that allowed different birds to acquire specific genetic changes in hemoglobin.  “The authors have provided a beautiful example of how we can make sense out of unpredictability by looking at deep evolutionary history,” wrote McGlothlin.