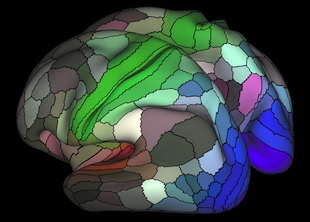 A multimodal map of human cortex: areas connected to hearing (red), touch (green) vision (blue) and opposing cognitive systems (light and dark)WASHINGTON UNIVERSITY; MATTHEW GLASSER, DAVID VAN ESSENSince the turn of the 20th century, neuroscientists have been trying to map the human brain. Now, using data from the Human Connectome Project, researchers from Washington University School of Medicine in St. Louis have created a multimodal map of the human cortex that combines data from cortical architecture, function, connectivity, and topography. The map, detailed today (July 20) in Nature, identifies 180 brain areas, 97 of which are new to neuroscience.

“It’s really a breakthrough in mapping the living human brain using [magnetic resonance imaging-based] methods,” neuroscientist Katrin Amunts at the University of Düsseldorf, Germany, who was not involved in the work, told The Scientist. “It’s methodically beautiful because it’s a multimodal approach, so it integrates different aspects of...

The gold standard for brain mapping is still based on Brodmann’s map, developed in 1909, which divided the cerebral cortex into 50 different areas based on its cellular architecture. But this was based on the study of just a single postmortem human brain. Subsequent maps have improved upon Brodmann’s, but they typically represented only a single modality of brain structure or function and were based on a small number of individuals. Washington University’s Matthew Glasser, David Van Essen, and colleagues decided to create a map that combines these properties to produce a more comprehensive atlas of the human cortex.

“You can look at a map of Earth and see mountains, valleys, and undulations—which are analogous to the folds of the cerebral cortex—but that doesn’t tell us directly about brain function,” Van Essen told The Scientist. “We want to look at the ‘political subdivisions,’” he added.

To generate the map, Glasser’s team used magnetic resonance imaging (MRI) data from the Human Connectome Project, a five-year National Institutes of Health-funded effort to map the anatomical and functional connectivity of the human brain. The researchers surveyed brain architecture based on structural MRI of cortical myelin content and thickness; cortical function, as measured by functional MRI (fMRI) scans of participants completing seven tasks, ranging from listening comprehension to math problems; and functional connectivity and topography, as measured with resting-state fMRI.

“It’s particularly important to find places where you have multiple independent measures changing in the same location,” Glasser told The Scientist. “Up until this point, people were looking at only single modalities.”

Using a combination of algorithms and human interpretation to analyze the MRI data from 210 healthy young adults, Glasser’s team separated the brain into 180 regions per hemisphere. Eighty-three of these regions had previously been reported in the literature, but 97 of them were new. One surprise was the rediscovery of a language-associated region called area 55b, which was first identified in 1956.

The researchers then used this map to train a machine-learning algorithm to identify the “fingerprints” of these brain areas in a group of another 210 people. The algorithm correctly identified more than 96 percent of the same cortical areas in the new group, and was able to identify how these maps differed between individuals, the researchers reported.

“There are many billions of brains, and each one is like a planet unto itself, with different geography and different political terrain,” Van Essen said. It’s these differences that could explain what makes a healthy brain different from one with schizophrenia or Alzheimer’s disease, for example.

The new brain map gives researchers a standardized tool for identifying specific brain regions, and could be used by neurosurgeons to home in on their targets with greater accuracy, Glasser and colleagues suggested.

In addition, the map could also expand scientists’ understanding of human evolution, by allowing for better comparisons with the brains of other nonhuman primates and other animals.

“The results of this new approach [provide] a remarkable new map of the cortex that informs about the fundamental functional and structural organization of the cortex and will be a new standard to map functional imaging studies to in the future,” Ed Lein, an investigator at the Allen Institute for Brain Science in Seattle who was not involved in the study, wrote in an email to The Scientist.

Because the map is based on neuroimaging, it has relatively low spatial resolution and provides indirect measurements of brain connectivity, Lein noted. “There are still many questions about how this parcellation based on neuroimaging . . .  relates to the physical connectivity of the neocortex and its cellular, molecular and synaptic organization.”

Glasser said his team will continue to refine the map. “We consider this a version 1.0 brain map,” he said, adding, “we’re hoping it will be able to grow and improve as new information becomes available.”