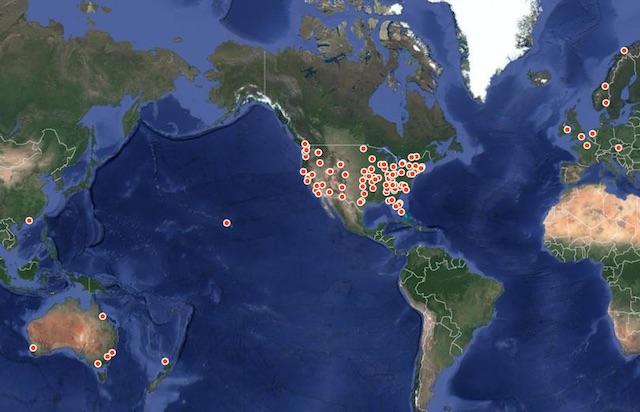 The Scientist's interactive map has information on science marches around the globe.THE SCIENTIST STAFF

In a small room at a community center in central Berlin, around 20 people representing various professions—including science, healthcare, and the arts—gathered on Thursday evening (February 16) to plan how to march for science on April 22. “What, exactly, is our goal?” one member of the group asked, spurring a debate about how political the march was willing to be. “We don’t want this to be an anti-Trump rally,” piped up another, who was met with nods of agreement around the room. “We want it to be pro-science.”

What started as a march on Washington, DC, as a reaction to a perceived “trend toward discrediting scientific consensus and restricting scientific discovery” has exploded into 274 satellite events across the globe (according to the latest count). “The march for science is a way...

The events materialized through social media. “It happened very quickly—Facebook sites and Twitter accounts sprung up around the country within a day or two of the plans in DC really becoming public,” Khan said. Similarly, Maja Schubert, a history graduate student at Freie Universität Berlin and an organizer of the Berlin march, said, “I created the Twitter account I think on a Tuesday and went to the [first] meeting on Thursday of that same week.”

In addition to sending a message of support to the American science community, march organizers around the world want to use the spotlight on science to illuminate issues in their own countries. “Just like the rest of the world, the Netherlands is suffering from a lack of transparency in the public debate about what is actually evidence-based, what is based on scientific research versus what’s based on someone’s opinion,” Aleksandra Badura, a postdoctoral fellow at the Netherlands Institute for Neuroscience and an organizer of the Netherlands march, told The Scientist. “[For example], we also have issues with movements against vaccinations and we have measles outbreaks happening in the Netherlands.”

In recent years in Australia, key science agencies, such the Climate Commission and the National Water Commission, were abolished and massive slashes were made to funding for the Commonwealth Scientific and Industrial Research Organization, the government’s science agency. In addition, “the influence and the relationship between the coal industry and politicians in Australia is a major problem that’s widely acknowledged,” Khan told The Scientist. “And that has led to not just an underlying skepticism of science [from the public], but the government fueling a lot of that skepticism.”

Canadians, on the other hand, have recently emerged from what many scientists lamented as the dark days of anti-science politics. “I think it was almost a no-brainer for us [to join] because we know how to march,” said Kathleen Walsh, the interim executive director at Evidence for Democracy in Canada and an organizer of the Ottawa march.

In 2012, thousands marched in the “Death of Evidence” rallies in Canada to oppose cuts to federal science funding, a disregard for evidence, and the censoring of government researchers. Three years later, the country voted in a government that unmuzzled scientists, boosted research funding, and appointed the first-ever Minister of Science. “Part of [wanting to march] was realizing that the hard-won gains that Canadian science has had in the last few years could be easily undermined,” Walsh said. “I think it’s a good chance to march again to keep that discussion going, and to continually say that science and evidence is important to our society, to our policy.”

Schubert doesn’t see a dismissal of scientific evidence as an issue in her country—and she wants to keep it that way. “I think we’re very lucky in Germany right now,” Schubert told The Scientist. “[But] . . .we have to be aware that while in general in Germany, [people are] well informed by science and facts, it’s not the case for everyone. [And] we have our own problems with political groups who are not so crazy about scientific facts and who want to misrepresent scientific things.”

March organizers in Hong Kong want to highlight the importance of science in education. “I would like to see more scientists having a say in the education policies, [such as] how math and science are taught in the schools,” said Godfrey Leung, a part-time science blogger and an organizer of the Hong Kong march.

Several march organizers expressed their desire to use the march to reach out to those beyond the scientific community and across the political spectrum. “We don’t want scientists to be this elusive, elitist group. . . . I think the reason for that was that we saw what happened in America. . . . The general public felt left behind [by] an elite group who they feel they can’t trust anymore,” Schubert said. “We want to make sure that we do something to help break this divide before it gets bad in Germany.”

“I really hope it’s not just a march of scientists,” Khan said. “I really hope we can get that message across, so that people who have no scientific training and don’t work in science industries will feel that it’s appropriate for them to be there in order to send a message that science is a valuable tool and it’s something that should be used for benefit by governments.”

As in the U.S., organizers abroad are grappling with the political baggage of a march for science. “It’s really important to us to say that this is really not partisan—it’s not left nor right—because we see from both sides that there is sometimes abuse or neglect of scientific evidence,” Badura said.

At the Berlin meeting, organizers agreed that they wanted to prevent the event from becoming a protest against Trump or the rising far-right parties in Europe. However, some pointed out that people might still show up to the march with anti-Trump signs, and that it would be difficult to disentangle their message from those of other march groups who were taking a more overtly political stance. Ultimately, they conceded that these were things out of their control—and that they would do their best to draft a mission statement that accurately conveyed their message, and to plan events that would make the march compelling to everyone (by trying to bring in Nobel prize winners and celebrities to speak, for example).

“We’re trying to make sure the focus is pro-science, pro-evidence-based facts and not anti-something,” Schubert says. “But of course, [politics] plays into that, because, why do we need to make the stand for evidence-based science? It’s because it’s in danger because of political developments.”