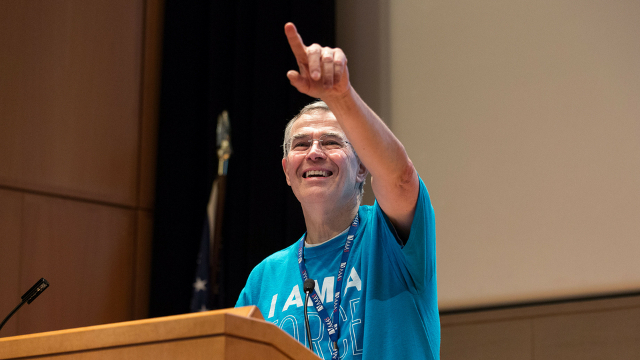 Rush Holt speaks at a rally held at AAAS headquarters before last year’s March for Science.JENIFER MORRIS/EPNACThis Saturday, March for Science events will be held around the world for the second year. One speaker at the Washington, DC, rally will be Rush Holt, a former physicist and New Jersey congressman and current CEO of the American Association for the Advancement of Science (AAAS). The Scientist spoke with Holt about what scientists get out of the march, and what he believes it has—and will—accomplish.

For our coverage of last year’s march, see “March for Science: Dispatches from Washington, DC”.

The Scientist: What does it mean for AAAS to be a partner in the March for Science?

Rush Holt: The March for Science has become an important symbol, as well as an important occurrence, because it reminds scientists and the public that there is a public...

There’s been nothing like it in the lifetime of any working scientist. It is a remarkable outpouring of scientists to talk about the marvelous accomplishments of science, the amazing relevance of science, and a call for defending the conditions under which science can thrive. Scientists have not been very good about going public over the years, and now, last year, a million scientists and friends of science in hundreds of cities turned out.

TS: Do you think last year’s march, or other activism associated with it, have yielded results?

RH: Some. The biggest effect was that scientists reminded themselves and each other that this is appropriate to do, that it’s important to do. I think many of the marchers last year were pleasantly surprised at the buoyant effect of being with thousands of other like-minded people to talk about the beauty of science, the relevance of science, the important place of science in society. . . . Maybe scientists shouldn’t need a reminder that it’s appropriate to go public, and in fact there’s an obligation to go public, but I think scientists do need that reminder, and the march serves as a reminder.

It’s hard to know whether the march is turning anything around with respect to the concerns that scientists have about scientific advisory councils or appointed science advisors or evidence-based policymaking. . . . But over time, I’m pretty sure that this newfound willingness to go public will produce benefits in those areas, in policymaking and legislation and environmental regulation and so forth.

I guess I’d say the last year, in the US federal government, the record for science has not been so good. Good appropriations from the congress, that’s true—I’m not sure that could be attributed to the March for Science—but on the other hand, dismissal of science advice in environmental decisions, failure to appoint science advisors in the cabinet departments or the White House, objection to bringing science into the study of gun violence—there are many examples of shortcomings. And continued obstruction of [science-based] policies to deal with changes in climate.

TS: When you spoke with The Scientist last year, you mentioned that AAAS didn’t have a good communications channel at that time with the White House. Has that changed?

RH: Not much. There have been intermittent conversations with various parts of the administration, but it doesn’t seem to us that there is a strong presence of science, or a consistent representation of the scientific viewpoint, in any of the administration departments. And so it’s hard to have ongoing communication. But we continue to try.

TS: How do you expect this year’s march to be different from last year’s?

RH: I don’t know for sure, but it seems that some of the novelty has worn off. In a way that’s good, because it means that people are more accustomed to the idea that scientists can go public. But that also might mean that there could be smaller numbers of people. . . . The most important part of this second March for Science is it that shows that last year’s march wasn’t just a flash in the pan, that it really does represent a change in thinking of scientists that it’s appropriate to step into the public square.

Clarification (April 13): The original version of this article omitted an editor's note stating that the interview had been edited for brevity.