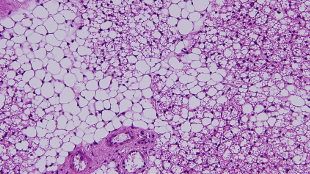 Stained brown fat cells surrounded by white fat cellsSIEGFRIED USSARSince the discovery that not all fat cells are created equal, there has been a search for ways to reliably identify the so-called “good,” metabolically active, brown adipocytes, and the “bad,” relatively inert, white adipocytes. Thus far, biomarkers to distinguish brown from white fat have all been either intracellular or secreted proteins, which are not useful for whole-tissue or in vivo studies. Now, researchers have identified three cell-surface markers specific to adipocytes that are differentially expressed on white, brown, or third form of fat cell—beige—in both mice and in human tissue. The study is published today (July 30) in Science Translational Medicine.

“These markers look pretty selective and the key is that they are cell-surface markers, which will allow their use in a variety of applications in the future,” said Patrick Seale, an adipose tissue researcher at...

White adipocytes store energy in the form of triglycerides, and depending on their location in the body, can have negative effects on health—contributing to insulin resistance, metabolic syndrome, and type 2 diabetes. Brown adipocytes are morphologically and functionally distinct, and are able to burn the energy stored as lipids while consuming glucose. “One of the major differences between brown and white fat is that brown fat cells have a much higher amount of mitochondria and also express the UCP1 protein that burns energy and turns it into heat,” said study coauthor Siegfried Ussar of the Institute for Diabetes and Obesity at the Helmholtz Center Munich.

Beige adipocytes are also energy-burning, and can be found embedded within white adipose tissue. All three fat cell types have distinct gene expression profiles, but it is difficult to morphologically distinguish between beige and brown adipocytes within a tissue.

To find proteins on the cells’ surfaces that are fat-tissue specific but also unique to each type of adipocyte, the researchers first mined publicly available gene expression databases for genes that mimicked the expression pattern of the well-defined adipocyte-specific protein, adiponectin, and the brown adipocyte-specific protein, UCP1. The team then tested the expression of the handful of genes retrieved from its in silico search on data from a variety of tissues from mice.

To validate these markers in human tissue, the team assessed biopsies of five patients from different fatty locations within the neck area, and, for further validation, compared the expression of these and other markers in paired superficial and deeper fat deposits from 10 additional patients.

“One important point of this study is that these markers were identified in a translational approach and shown to mark human adipocytes,” said Christian Wolfrum, an obesity and nutrition researcher at ETH Zurich in Switzerland who was not involved in the study. “Most research is done in mouse and cell lines, but very little is done with human tissue.”

One potential application for these markers is in vivo imaging of brown and beige fat in humans. “There are no simple, specific imaging techniques that can differentiate among white, brown, and beige fat,” said study coauthor C. Ronald Kahn of the Joslin Diabetes Center at Harvard Medical School. Only the complex and partly invasive positron emission tomography-computed tomography (CT-PET) technique has been used to distinguish between white and brown fat deposits. But this technique is limited, said Kahn, as only the fraction of brown fat that is metabolically active at the time can be detected using CT-PET.

Wolfrum agreed. “We now have potential direct biomarkers to develop methods to trace and quantify brown fat in humans,” he said. “We could be able to screen for brown fat populations and to quickly assess the impact of a treatment, let’s say, on brown adipose tissues instead of taking a fat biopsy.”

Kahn and his colleagues also envision that these markers might one day be used to develop adipocyte subtype specific drug delivery systems. The researchers are now assessing the physiological functions of the cell surface proteins they identified.

Still, both Seale and Wolfrum cautioned that the nature of brown, white, and beige fat remain up for debate.