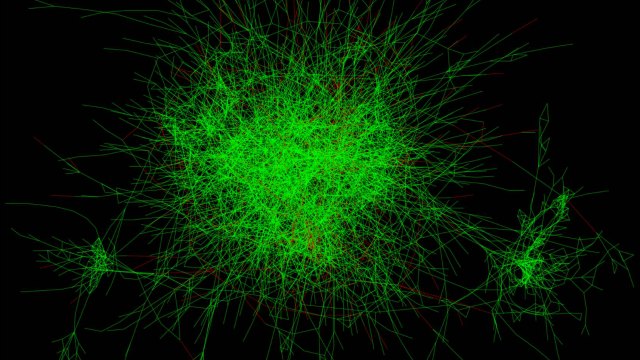 A "hairball" of genetic interactionsNOVARTISIn what appear to be the largest RNAi screening efforts in cancer to date, two groups of scientists have tamped down the expression of thousands of genes in hundreds of human cancer cell lines. Their results, published today (July 27) in two Cell papers and made freely available to researchers, confirm the roles of the usual genetic suspects in cancer and identify new potential therapeutic targets.

The Scientist spoke with the lead author of one of the studies, Rob McDonald, a senior investigator at Novartis Institutes for BioMedical Research, about his team’s Project DRIVE endeavor. The study systematically knocked down more than 7,800 genes in nearly 400 cell lines. The other project, by researchers from the Broad Institute and Dana Farber Cancer Institute, looked for genetic dependences for cancer growth or survival among 501 cell lines.

The Scientist: What is...

Rob McDonald: Very simply, it was to identify new therapeutic targets across a variety of cancer types that would hopefully impact patient care.

TS: How did you go about it?

RM: It really started with a foundational tool we have here at Novartis called the cancer cell line encyclopedia. It was developed a number of years ago in collaboration with the Broad where we collected over 1,000 different cell line models and then proceeded to characterize them for mutations and gene expression and the like.

It was our attempt to functionally annotate the cancer genome. The original phase characterized mutations and expression, but it really didn’t tell us what genes each cancer type cared about. That’s what Project DRIVE aimed to identify. So within a particular cancer type, let’s say melanoma, what genes does melanoma care about, and are they the same or different than what lung cancer cares about?

TS: How did you select the genes included in this screen?

RM: Best case scenario, we would have screened the genome, but one thing that was really important to us was to actually have that depth as far as shRNAs [short hairpin RNAs] per gene. We have 20 shRNAs per gene. That really gave us confidence in the dataset. So because we had so many reagents per gene, we did have to be a little selective about the genes we included.

We were sure to include things we know would score, [such as] oncogenes that are mutated. . . . We also looked at what genes were expressed in the cancer cell line encyclopedia.

Ultimately, we are interested in making drugs. [W]hether or not we thought the protein would be druggable was also a factor.

TS: What were some of the highlights of what you learned from this?

RM: The predictable ones are the ones where the target of the shRNA is, let’s say, mutated, like an oncogene like KRAS or BRAF. The synthetic lethal cases tend to be a more complex relationship. [In synthetic lethality, the deficiency of a set of genes causes trouble, but knocking down any one of those genes alone has no effect.] You’ll see a cancer dependence in a subset of cell lines, but the gene you’re knocking down is not directly mutated or highly expressed.

Then you need to figure out what that relationship is between the genetic dependence and the cell lines that are sensitive. That’s where the fun begins as far as I’m concerned.

RM: There’s a web portal that will allow anyone to go in and look up their favorite gene and see what that phenotype is across 400 cancer cell lines. That was really important to us to further the cancer research community.

The other facet of that web-based tool is you can go in and also enter a gene of interest but then ask the question, what genes that were tested had a similar phenotype? Or, which other genes behaved similarly across the dataset? In that way you can start to understand protein complexes and protein networks.