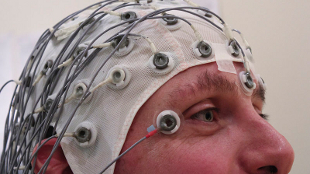 Electrodes are held in place with a cap during an EEG recordingWIKIMEDIA, CHRIS HOPEGeneral anesthesia has transformed surgery from a ghastly ordeal to a procedure in which the patient feels no pain. Despite its widespread use, however, little is known about how anesthesia produces loss of consciousness—a blind spot brought into sharp focus by the fact that patients still occasionally wake up during surgery. But over the past 5 years, researchers have made significant progress in understanding what happens in the brain as consciousness departs and returns.

Peering into the anesthetized brain with neuroimaging and electroencephalograph (EEG) recordings, scientists have found evidence to support the “integrated-information theory,” which holds that consciousness relies on communication between different brain areas, and fades as that communication breaks down. EEG studies have also revealed distinctive brain wave patterns that signal when consciousness is lost and regained, offering easily identifiable markers for this...

Though many questions remain, advances in brain activity monitoring promise to shed light the neural basis of consciousness, and to eradicate the nightmare of mid-surgery awakenings. What’s more, by combining EEGs with magnetic brain stimulation, researchers may be able to measure consciousness and track recovery in unresponsive patients diagnosed as “vegetative,” who in recent years have been shown to sometimes have higher levels of consciousness than previously realized.

To tease out neural markers of consciousness—or more precisely, the loss of consciousness—a group led by Patrick Purdon, an instructor of anesthesia and bioengineer at Harvard Medical School and Massachusetts General Hospital (MGH), recently looked at brain activity in epileptic patients as they received increasing doses of the commonly used anesthesia drug propofol in preparation for surgery. The purpose of the surgery was to remove electrodes that had previously been implanted in the patients’ brains to monitor seizures. But before they were taken out, the electrodes enabled the researchers to study the activity of individual neurons in the cortex, in addition to large-scale brain activity from EEG recordings.

In a Proceedings of the National Academy of Sciences paper published last November, the researchers reported that a few seconds before consciousness was lost—as indicated by the patients’ response to sound stimuli—the EEG revealed the onset of low-frequency (>1 hertz), or “slow wave,” oscillations. Meanwhile, the implanted electrodes showed that the firing of ensembles of individual neurons in different but nearby regions of the cortex was interrupted every few hundred milliseconds—an unusual pattern, as cortical neurons usually fire regularly and without interruption. The slow oscillations, the team realized, were occurring asynchronously across the cortex, meaning that when one set of neurons in one area was firing, another set of neurons in a nearby area was often silent. This pattern likely disrupts the passage of information between cortical areas, something that has been associated with loss of consciousness by several studies over the last few years.

The importance of communication between discrete groups of neurons, both within the cortex and across brain regions, is analogous to a band playing music, said George Mashour, a neuroscientist and anesthesiologist at the University of Michigan, Ann Arbor. “You need musical information to come together either in time or space to really make sense,” he said. “Consciousness and cognitive activity may be similar. If different areas of the brain aren’t in synch or if a critical area that normally integrates cognitive activity isn’t functioning, you could be rendered unconscious.”

Earlier this year, Purdon and colleagues were able to discern a more detailed neural signature of loss of unconsciousness, this time by using EEG alone. Monitoring brain activity in healthy patients for 2 hours as they underwent propofol-induced anesthesia, they observed that as responsiveness fades, high-frequency brain waves (12–35 hertz) rippling across the cortex and the thalamus were replaced by two different brain waves superimposed on top on one another: a low-frequency (<1 hertz) wave and an alpha frequency (8–12 hertz) wave. “These two waves pretty much come at loss of consciousness,” said Purdon.

At first, as the patients were sedated, the alpha waves peaked when the low-frequency waves were at their lowest point—a pattern the researchers termed the “peak-trough.” When the patients stopped responding altogether, that relationship flipped: the alpha and low-frequency waves peaked at the same time, known as the “peak-max” pattern. Then, as the patients began to respond again, the “peak-trough” returned. “We now have the ability to be certain that someone is unconscious by finding that peak-max pattern,” said Purdon. “And we can predict when they can recover consciousness by looking at this peak-trough pattern.”

The patterns are reliable and distinctive enough to have immediate application in the clinic, added coauthor Emery Brown, an anesthesiologist at MGH and a neuroscientist at the Massachusetts Institute of Technology. “We’ve started to teach our anesthesiologists how to read this signature on the EEG” to improve upon current methods for monitoring patients during surgery, he said.

“These beautifully choreographed series of changes are really promising,” said Robert Pearce of the University of Wisconsin, an anesthesiologist and neuroscientist who studies the neurophysiology of consciousness. “It’s very clear that these [EEG patterns] are associated with consciousness levels.”

Anesthesia is not the only state in which consciousness is lost, of course. So could the same markers be used to assess the level of consciousness in patients in a vegetative state? Not necessarily, said Mashour, because the two states are distinct and may result from different neural mechanisms. But, he added, “the more we focus on measuring consciousness—rather than the effects of anesthetics, per se—the more versatile our future monitors will be.”

With this goal in mind, Pearce and University of Wisconsin neuroscientist Giulio Tononi—the originator and leading proponent of the integrated-information theory of consciousness—have combined EEG recordings with transcranial magnetic stimulation (TMS) to measure the gradual breakdown of connectivity between neural networks during natural REM sleep and anesthesia, as well as in brain-injured, unresponsive patients. Using an electromagnetic coil to activate neurons in a small patch of the human cortex, then recording EEG output to track the propagation of those signals to other neuronal groups, the researchers can measure the connectivity between collections of neurons in the cortex and other brain regions.

“It’s a perturbational approach,” said Pearce—“you can directly to activate neurons in one part of the cortex and see how other parts respond.”

If the integrated-information theory holds true, the researchers will be able to use their strategy to gauge levels of consciousness even in a damaged brain, which may not exhibit the same EEG markers of consciousness as an intact, anesthetized brain. Indeed, Tononi and Marcello Massimini of the University of Milan have already tested the idea in severely brain-damaged, non-communicative patients—including vegetative-state patients, minimally conscious patients, and those with locked-in syndrome, who are fully conscious but unable to move—and found the technique proved its worth.

In minimally conscious patients, the magnetically stimulated signals propagated fairly far and wide, occasionally reaching distant cortical areas, much like activations seen in locked-in but conscious patients. In patients in a persistent vegetative state, on the other hand, propagation was severely limited—a breakdown of connectivity similar to that observed in previous tests of anesthetized patients. What’s more, in three vegetative patients that later recovered consciousness, the test picked up signs of increased connectivity before clinical signs of improvement became evident.

The results, published in Brain in January 2012, suggested that “effective connectivity does correspond to the state of consciousness” in patients with brain disorders, said Pearce, and that the combined TMS/EEG approach is an effective way to measure consciousness in brain-damaged patients who cannot communicate with the outside world.

“I think understanding consciousness itself is going to help us find successful [measurement] approaches that are universally applicable,” said Pearce.

Correction (April 18): Patrick Purdon is an instructor of anesthesia and bioengineer at Harvard Medical School and Massachusetts General Hospital, not an anesthesiologist or a neuroscientist at the Massachusetts Institute of Technology, as previously stated. The text has been changed to reflect this. The Scientist regrets the error.