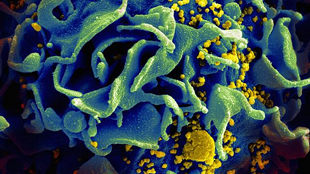 HIV-infected T cellFLICKR, NIAIDMost HIV treatments depend on the activation of all CD4+ memory T cells that harbor the latent reservoir (LR), which is composed of inactive HIV proviruses integrated into the genomes of these resting cells. Knowing the size of the LR is essential for measuring the success of antiviral therapies. Two common ways to test for provirus in a patient with HIV are the PCR-based method, in which integrated HIV DNA is amplified and quantified using PCR and the viral outgrowth assay (VOA). For the VOA, a patient’s CD4+ T cells are collected and then activated in vitro, so that they produce virus from the LR and release viral proteins that can then be quantified. PCR detects much more provirus than the VOA, and in the past, it was assumed that not all of the provirus that is detected by PCR is transcription-competent. Now,...

“I think it’s an excellent paper and a very provocative finding,” said HIV researcher Jonathan Karn, a professor of molecular biology at Case Western Reserve University, who was not involved in the work. The evidence “does indicate that the VOA probably underestimates the latent reservoir,” added Karn, which is “really quite an important observation.” Knowing the LR’s true size is essential for clinicians who must decide when a patient can discontinue antiretroviral therapy, he noted.

The VOA “is a very sensitive assay to detect all possible viruses released after maximum T cell activation, so people have believed that this scale of the latent reservoir is what we need to eradicate, which is around one in one million resting CD4+ T cells,” said first author Ya-Chi Ho, who is a postdoctoral fellow at Johns Hopkins. The research team thus began as it would have approached a VOA: by activating patients’ CD4+ T cells. Then they used PCR to amplify proviruses not induced by activation, and sequenced them directly.

The researchers found that 88 percent of proviruses had obvious defects that would make them replication-incompetent, such as deletions or start codon mutations, which was consistent with previous observations. However, almost 12 percent had no obvious sequence defects, yet were  not induced during the first round of T cell activation. The scientists examined the genomic location and methylation status of these proviruses. They found that most of the noninduced proviruses were in active transcription units and were not CpG-methylated. They also showed that more rounds of stimulation could induce some of the proviruses to produce active virus. Based on these results, the researchers proposed that provirus induction is stochastic, and that the size of the LR is likely around 60 fold higher than previously predicted by VOA.

“I think everybody in the field had a sense that there was something like this to explain the discrepancy between the VOA and the PCR-based assay,” said Fabio Romerio, an assistant professor at the Institute of Human Virology at the University of Maryland School of Medicine in Baltimore, who did not participate in the study. “What was really striking, at least to me, was that there is a high frequency of cells that do not produce virus when they are cultured in the VOA, and yet they contain replication-competent HIV sequences,” he continued. “That is scary,” Romerio said, because latent HIV must be induced in vivo in order for anti-latency drugs to be successful.

The paper confirms that “there are obviously difficulties with every ex vivo assay,” said David Margolis, a professor of medicine at the University of North Carolina, Chapel Hill, who studies HIV latency but was not part of the work. “None of the data is really surprising, but it’s really important that it’s definitively shown,” he added, because “some people keep calling measures of HIV DNA the HIV reservoir. That’s just not true. It’s a measure of persistent infection, but most of what you’re measuring is not a reservoir anymore, as demonstrated by this work.”

A larger HIV reservoir may sound daunting, but experts agreed that although the paper showed caution is required when interpreting all assays, it is better to understand the full size of the LR than to be in the dark.

“I think this paper is part of a very exciting time, where we’re starting to see that there is a way forward from where we are,” said Margolis. “I think we just have to be very rigorous and continue to do careful, but difficult studies like this one that will ensure important progress.”

The field will need to grapple with how to proceed with activation and treatment in vivo, based on new understanding that latent, replication-competent HIV may not be activated, said Karn. But “I am very optimistic that we can get this right,” he added.