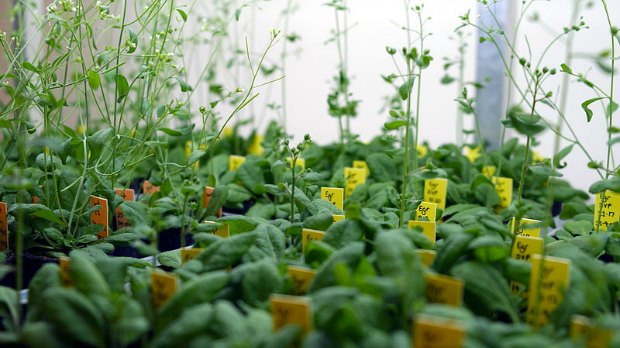 WIKIMEDIA, CARL DAVIES, CSIROCompared to humans’ century-long life span, some plants—evergreens in particular—have the capacity to live for an exceptionally long time, even millennia. In a study published in Current Biology today (May 5), scientists from the University of Bern in Switzerland present evidence for a potential mechanism that could help explain some plants’ everlasting longevity: minimal stem cell divisions to avoid “mutational meltdown.”

The team zeroed in the formation of axillary meristems—stem cells that give rise to branches—in Arabidopsis thaliana and tomato, finding few cell divisions between the apical meristem located at the very top of a plant and the axillary meristems. With such little proliferation comes less opportunity to accumulate potentially deleterious genetic mutations in somatic cells that could kill the organism, the authors reasoned.

“Meristem aging is not a problem for perennial plants, in other words,” said Sergi Munné Bosch, a plant physiologist at the...

“It’s a very interesting paper on the preservation of the integrity of the germ cell line,” said Larry Noodén, a plant biologist and professor emeritus at the University of Michigan. “Whether it determines longevity, that may be a different matter.”

In tomato, Kuhlemeier said, “it turns out all the cells around are making lots of cell divisions to make leaves and stems, but few cells are destined to become the axillary meristem. . . . Those really don’t divide.” (See “Building Bigger Beefsteaks,” The Scientist, June 2015.)

“It’s a beautiful piece of work,” Rob Lanfear of Macquarie University in Australia wrote in an email to The Scientist. If the same is true in other species, the results suggest that most plants have something akin to the germline in animals, added Lanfear, who was not involved in the work. “That is, plants seem to set aside some cells in such a way as to minimise the number of mutations they accumulate.”

Kuhlemeier and colleagues then extrapolated what they observed to predict how this would play out in the branches of trees. A mutation in an apical stem cell may get fixed in a resulting axillary meristem (and, therefore, in the branch that grows from the meristem), but the mutation would not spread to all branches of the tree because they arise from different meristems. “So a tree is a collection of meristems and each is genetically individual,” said Kuhlemeier.

Such biology allows the tree to maximize genetic heterogeneity amongst its branches; perhaps one branch might have the ability to resist a pathogen while another succumbs to it. In such a way, a plant could develop a formidable life span.

Kuhlemeier said that his team’s results must still be validated.

One project underway in Switzerland could lend empirical data to test the group’s hypothesis. Philippe Reymond of the University of Lausanne is heading up the Napoleome project, an effort to sequence the full genome of a 238-year-old oak tree on campus. Reymond’s team has actually sequenced two genomes, taken from different parts of the tree, to see how many mutations are present and whether these distant sites share any mutations.

“This is an attractive hypothesis,” Reymond said of Kuhlemeier’s idea on branch heterogeneity. “This is what we’re testing basically with our project. . . . No one has an idea of how many somatic mutations are in an old tree that has lived outside for more than 200 years.”

Whether this mechanism to limit somatic mutations was selected for evolutionarily to increase longevity or protect the germline “remains an open question, and one that would be very tricky to answer,” said Lanfear.

To Noodén’s mind, it’s possible the researchers’ observations of the meristem constitute a mechanism for life span maintenance, but it is likely not the only mechanism. “The relationship of mutation accumulation to aging and death is not clear,” he said.