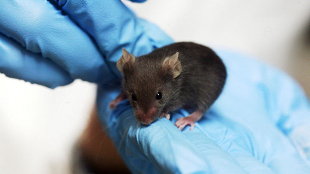 WIKIMEDIA, RAMAThe mere presence of a male scent, whether it be that of a male researcher or some other mammal, is enough to trigger a physiological stress response in mice that can result in analgesia. But the same is not true of a female’s smell, suggesting that the sex of the researcher handling the animals could influence the results of rodent research.

The study, published today (April 28) in Nature Methods, “has huge implications,” said Robert Hallock, a taste and smell researcher at Skidmore College in Saratoga Springs, New York, who was not involved in the study. “The so-called external validity of research is diminished here. One lab has all male experimenters, another lab has all female experimenters, and it may affect the replicability of a study.”

“It’s definitely a study that will impact the field of behavioral phenotyping for biomedical research,” agreed behavioral biologist Lars Lewejohann...

The study was motivated by a handful of anecdotal reports from the lab of Jeff Mogil at McGill University in Montreal, showing that sometimes mice didn’t react to painful stimuli as expected.

“Over the years, people will come to me and say they were doing a run where they’re injecting something that’s going to cause some obvious pain behavior . . . [but] while they were injecting the seventh and eight mouse, [the animals] weren’t showing pain behaviors,” he said. His lab members suspected that maybe the reagents were no good or something else had gone wrong with the injections, but when they scored the video later, the animals were responding to the pain normally. “They were just waiting for me to leave,” lab staff would tell Mogil. “That is to say, people in my lab were telling me that experimenters cause analgesia,” he said.

To investigate, Mogil and his colleagues ran a straightforward pain-stimulating experiment, in which they injected mice with the inflammatory agent zymosan A. Then, an experimenter would sit in the room for 30 minutes, typically just reading a book, or the mice would be left alone. The results revealed that the presence of a male, but not a female, experimenter reduced the facial grimacing, a measure of pain, observed in the mice. “It was only the men that produced this effect, not the women,” Mogil said. “That was a big shock.”

After a while, the researchers grew tired of sitting in a room for 30 minutes at a time, so they decided to try the same experiment using worn T-shirts, rather than live experimenters, and again found that only male scents triggered an analgesic response in the mice. The findings suggest that the phenomenon is mediated by olfactory cues. Indeed, testing specific chemicals known to be prevalent in male axillary secretions, the team was able to elicit the same analgesic effects.

The researchers also explored whether the effect was human-specific, testing bedding from male and female mice, rats, guinea pigs, cats, and dogs. Across the board, materials from a male mammal reduced pain. “The experiment showed that this really has nothing to do with people,” Mogil said. “Any male animal that is a stranger to the subject that has testosterone will produce the effect.”

Further tests confirmed what the researchers suspected: that the reduction in pain was a result of a typical stress response, which is known to cause analgesia. “At the end of the day, this has nothing to do with pain,” Mogil said. “The reason we saw these effects is because stress kills pain.” The behavioral changes the researchers observed were “comparable to 15 minutes restraint in a tube or three minutes of forced swimming, two things I can guarantee you mice do not like,” he adds. “These are really big stressors.”

Moreover, he added, because the underlying stress affects more than just pain, the phenomenon is likely not limited to behavioral experiments. “Any tissue whose physiology is affected by stress, which is probably all of them, those cells were at a very different state when extracted,” Mogil said.

“It’s something that’s going to have to be in the back of the mind of any researcher doing [rodent] research,” agreed Hallock. “It’s more than just behavior.”

Of course, Lewejohann pointed out, ideally the same experimenter is present throughout a given trial, and many rodent studies do follow such robust controls. “In properly conducted behavioral studies, these experiments are usually conducted by the same person,” he said. But this is certainly not always the case. “Sometimes there’s a pair of people working on a project—one person might get the animal and start the session and the other person might finish it,” said Hallock.

Mogil is hopeful that labs who have trouble replicating results—perhaps coincident with graduate student or postdoc turnover—will now be able to go back to those data and see if experimenter sex may be at the root of the discrepancy. “I hope this will have a lot of explanatory power to explain past confusions and to avoid future confusions of this type,” he said.

And going forward, he added, “I think the real solution to the problem is simply reporting. This is something that should be in methods sections that currently isn’t.”