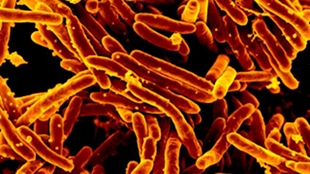 Mycobacterium tuberculosisWikimedia, NIAIDDrugs that interfere with the synthesis of the essential nutrient  folate are among the oldest antibiotics around. Now, after decades of successful use, researchers are using metabolomics to discover how, exactly, they work.

One such drug, commonly used to treat tuberculosis (TB), is processed by a key enzyme in folate biosynthesis, breaking down into different products that interfere with enzymes that act later in the pathway.  The results, published today (November 1) in Science, contradict the previous belief that the drug, para-aminosalicylic acid (PAS), worked by simply binding the enzyme such that it was not available to process a folate precursor, and may point to novel TB drug targets and antimicrobial strategies beyond enzyme inhibition.

“It’s a really good example of how we don’t really understand how many drugs work,” said Eric Rubin, a tuberculosis researcher at Harvard University who did not participate in...

Multiple drug-resistant tuberculosis is a growing problem worldwide—but the search for new drugs is a long and difficult process. “Thus every effort to make maximal use of TB drugs already tried and tested must be made,” Alimuddin Zumla, a microbiologist at University College London, who did not participate in the study, wrote in an email to The Scientist. The findings that PAS, a time-tested therapeutic, works not by efficiently inhibiting its target enzyme, but by being processed into metabolites that block later steps in folate synthesis, suggests that “rather than inhibition, [the process of] catalysis should be exploited for drug development,” Zumla added.

Interfering with folate synthesis—a key precursor in DNA base synthesis—is a time-tested antibiotic strategy. It has proven effective in humans because, unlike bacteria, people get folate from their diets, and thus have no folate-synthesizing pathways to disrupt, explained Stephen White, a structural biologist at St. Jude Children’s Research Hospital in Memphis, who was not involved with the study.

Sulfa drugs, a class of antibiotics developed in the 1930s, work well against many bacterial species by mimicking para-aminobenzoic acid (PABA), a precursor to folate, inhibiting the enzyme that processes PABA by competing with it for binding. PAS, first used against tuberculosis in 1948, also mimics PABA, but inhibits the enzyme weakly. Oddly, sulfa drugs work poorly against M. tuberculosis, while PAS effectively prevents bacterial growth.

In order to understand more about how PAS and sulfa drugs are processed by M. tuberculosis, Kyu Rhee and his colleagues at Weill Cornell Medical College turned to metabolomics. They treated tuberculosis bacteria in culture with each drug individually and measured changes in the bacteria’s metabolites, finding that sulfa drugs were being transformed into inactive derivatives that could not bind to the PABA-processing enzyme, leaving the enzyme free to carry out its folate-synthesis duties.

Scientists had previously speculated that sulfa drugs fail to work against M. tuberculosis because they cannot enter the bacteria, but the findings show that the sulfa drugs “get in fine, but they get processed and deactivated,” explained White.

Rhee’s group discovered that PAS, on the other hand, bound to and was processed by the enzyme, breaking down into several different methylated products of PAS, one of which is known to have notable anti-bacterial activity. Other PAS byproducts appear to affect the folate synthesis pathway. Together, the results suggest that PAS is converted by its target enzymes into anti-bacterial products that inhibit bacterial growth through multiple mechanisms, explaining its success over the ineffective sulfa drugs.

“It’s counterintuitive,” said Rubin, that M. tuberculosis is most affected not by PAS’s direct binding of a PABA-processing enzyme—which produces inhibition that is too weak to effectively fight bacterial growth—but by the PAS derivatives that are produced as a result of that enzymatic interaction.

The study suggests that researchers may need to tweak their approach, Rubin said. Finding drugs that are broken down into toxic compounds, rather than those that directly inhibit key enzymes, could be an effective approach in the future.

Furthermore, Rhee’s work shows that downstream targets in the folate pathway could also prove to be effective TB drug targets, said White. Identifying which enzymes are targeted by PAS’s metabolites could help researchers identify those targets likely to be most effective. By optimizing how those PAS derivatives poison the folate pathway, researchers may be able to make “PAS a better drug,” White said.