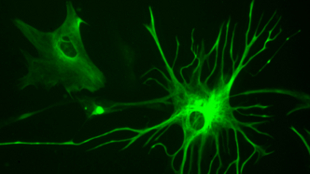 WIKIMEDIA, BRUNO PASCALMice that received transplants of human glial progenitor cells learned much more quickly than normal mice, according to a study published today (March 7) in Cell Stem Cell. The findings support the theory that glial cells made a significant contribution to the evolution of our own enhanced cognitive abilities.

“This work is very exciting and surprising because it demonstrates that there may be something special about human glial progenitor cells that contribute to the amazing complexity and computational abilities of the human brain,” said Robert Malenka, a neuroscientist at Stanford University who was not involved in the study, in an email to The Scientist.

For many years, glia cells, non-neuronal cells present in the same numbers as neurons in the brain, were thought to play only a supporting role, providing structure, insulation, and nutrients for neurons. But in the past 20 years it has...

Recent studies have also demonstrated that human astrocytes are very different from those found in mouse and rat brains, on which most previous studies of astrocyte physiology were based. Human astrocytes are more numerous, larger, and more complex, and they are capable of far more rapid signaling responses than rodent astrocytes.

Together, these results suggest that astrocytes may have been critical to the evolution of enhanced neural processing in humans. Having already transplanted human glial progenitor cells (GPCs) to restore myelination in myelin-deficient mice, Steven Goldman of University of Rochester Medical Center in New York and colleagues realized that they could repeat the trick in normal mice to assess the contribution of human-specific astrocytes to synaptic plasticity and learning.

Goldman’s team grafted human GPCs into the brain of baby mice and waited until they became adults, by which time a large proportion of their forebrain glia were replaced by human cells differentiated from the GPCs, including astrocytes with the same structure and functional capabilities as in humans. The researchers then looked at long-term potentiation (LTP)—the strengthening of synaptic connections and a key mechanism underlying learning—in the hippocampus, and found that it was significantly enhanced in mice with human GPCs compared with normal mice and mice engrafted with mouse GPCs. Goldman and colleagues also assessed the performance of the mice on several behavioral tasks that measure leaning and memory—including auditory fear conditioning, a maze test, and object-location memory—and found across the board that mice with human GPCs learned significantly more quickly than normal mice.

“The most remarkable result is that the human glial progenitor cells implanted in the mouse brain caused enhanced learning,” said Malenka. “I don't think most neuroscientists, including those that focus on glia, would have predicted that result.”

Exploring potential molecular mechanisms behind such an effect, Goldman and his colleagues noticed significant increases in the release of a cytokine called TNFa in the human-derived astrocytes in mice. And when they blocked the production of this molecule, LTP was reduced, as was performance in the object-location memory task, suggesting that TNFa is an important player in the glia-mediated enhancement of synaptic function.

For Malenka, the study offers “further evidence for the increasingly accepted idea that glial cells importantly influence synaptic function.” Goldman went further, adding that the results provide “a substantial clue” to the basis of human smartness. “We now have to view the evolution of glial form and function as one of the most important aspects of human cognitive evolution,” said Goldman.

Furthermore, having reported in February that they can generate human GPCs from skin cells reprogrammed into induced pluripotent stem cells, Goldman’s team can now make patient-specific GPCs from individuals with neuropsychiatric and neurological diseases thought to be specific to humans or primates—and therefore potentially glial-associated. By implanting these cells into normal mice, the researchers can create in vivo models with which to investigate the role of glial cells in these disorders.

“This gives us a broad platform to sort out the differential contribution of glia and neurons in certain diseases,” said Goldman, who is already analyzing data from such experiments on schizophrenia and Huntington’s disease. “Most current therapeutics target neurons, but this gives us the potential to develop glial targets for new drugs.”