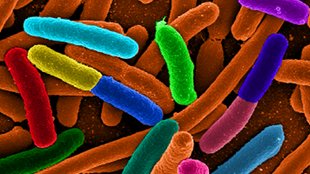 WIKIMEDIA, MATTOSAURUSSurgically bypassing the stomach is not the only reason that patients undergoing such a procedure quickly begin to drop pounds. Changes to the microbial make-up of their intestines also play a big role, according to a paper published in Science Translational Medicine today (March 27). The results suggest that tweaking a person’s gut microbes to mimic the effects of bypass treatment might, one day, be an effective means of losing weight without the need for surgery.

“What they’ve shown in this paper is that gastric bypass has an effect on the bacteria of the intestine, and that if you take those bacteria and transplant them into another mouse [that hasn’t had surgery] . . . that mouse [also] loses weight, which is amazing,” said Louis Aronne, a professor of medicine at Weill Cornell Medical College in New York, who was not involved in the study.

The problem with regular dieting  is that “when you are forced to eat less . . . your body reacts by reducing basal energy expenditure,” said Lee Kaplan, director of the Massachusetts General Hospital Weight Center in Boston and a senior author of the study. “So it does everything it can to make you more hungry and to burn fewer calories to try to make you regain the weight.”

One effective albeit drastic solution is gastric bypass surgery. This procedure was originally thought to work by forcibly reducing a person’s capacity for food, but the effects are more complicated than they first seemed, Kaplan explained. “We began to see, in patients that got bypass surgery, that they were not hungry and that they were not craving what they used to crave.” Studies in animals also revealed that the procedure had some unexpected metabolic effects. “Energy expenditure goes up rather than down,” said Kaplan. “So everything about bypass surgery seems to be the opposite of what would happen with a diet.”

Hints as to the cause of the unexpected physiological changes came from studies in both rats and humans that showed gastric bypass surgery altered gut microbial profiles. Kaplan and his team have now observed similar bypass-induced microbial changes in obese mice. Within 1 week of surgery, three phylogenic groups of microbes—bacteriodetes, verrucomicrobia, and proteobacteria—were significantly enriched in the feces of the mice. And by 5 weeks, this restructuring of the microbial community had stabilized. As expected, the mice also lost 30 percent of their body weight, and exhibited metabolic changes—their blood glucose levels lowered and insulin sensitivity improved.

However, as with previous studies, it remained unclear whether these microbial and metabolic changes were directly linked. To determine if these changes shared a causal relationship, Kaplan’s team transplanted the microbial community from the guts of mice that had undergone surgery into microbe-free, normal-weight mice.

“What we saw in the recipients that were given a gastric bypass mirobiota was that their food intake was not altered, but they had less adiposity [body fat] and they lost about 5 percent of their body weight,” said lead author Alice Liou, a research scientist in the laboratory of Peter Turnbaugh at Massachusetts General Hospital.

“The microbiota is only one piece of the story,” noted Kaplan, “but based on the results we report in this paper, it’s clear that it is a significant piece.” In fact, he said, “we calculate that the microbiota transfer could account for upwards of 20 percent of the effects of the surgery.”

Although it is not yet clear how the microbes are altering metabolism and energy expenditure, or whether such microbial transfers would be effective in humans, the results “imply that a probiotic that replicates the effect of gastric bypass surgery is possible, and may contribute to weight loss,” said Aronne.

Indeed, added Elaine Holmes, head of computational and systems medicine at Imperial College London, “by understanding the mechanism of weight loss and adipose reduction . . . the ultimate hope is that we can identify new drug targets to achieve the same effects as a bypass, but without the risk of surgery.”