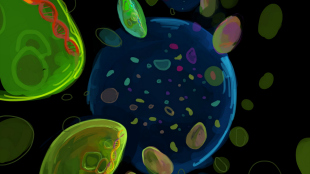 MIT, CARLY SANKERThe cyanobacterium Prochlorococcus is arguably one of the most important organisms on the planet when it comes to supporting life. Hovering near the surface of the ocean, these microbes—a trillion trillion of them—produce half of the world’s oxygen. Given their abundance, results published today (April 24) in Science illustrating their astounding genomic diversity are not terribly surprising. But the study also uncovered genomic lineages, or “backbones,” that may have originated millions of years ago.

“Some of us did not believe that microbes are infinitely diverse,” despite a prevailing assumption, said Steve Giovannoni, who studies bacterioplankton at Oregon State University and who was not involved in the study. “That very high diversity is channeled into patterns, and we’re starting to see what those patterns look like.”

Sallie Chisholm, a microbial ecologist at MIT, has been studying Prochlorococcus for years. Previous genomic studies of the microbe had...

As expected, the group found high diversity in regions of the genome that were known to be hypervariable. “What was also surprising here was the diversity in the core genome, that they have different alleles,” Chisholm told The Scientist. Her team identified subpopulations, each of which has a particular set of core gene alleles associated with a distinct chunk of more variable, or “flexible,” genes. Together, the core alleles and their associated flexible genes represent a so-called genomic backbone. “This covariation between the core alleles and flexible gene content, and its fine scale resolution, represents a new dimension of microdiversity within wild Prochlorococcus populations,” the authors wrote in their report.

Such diversity within the core genes suggests that the Prochlorococcus lineages originated perhaps millions of years ago. “Very often people think this diversity exists because it is being generated continuously,” said Francisco Rodríguez-Valera, who studies microbial genomes at University Miguel Hernández in Elche, Spain, and did not participate in the study. “To get these single nucleotide polymorphisms [in the core genes], they need time.”

Chisholm’s group found that the backbone subpopulations varied in abundance depending on the time of year. The result further supports “that each one of them is ecologically distinct,” said Nadav Kashtan, the lead author of the study, who conducted the work as a postdoc in Chisholm’s lab. The finding also suggests how populations of Prochlorococcus might respond to seasonal changes in environmental conditions that occur over tens of generations by adjusting the relative abundance of subpopulations according to the specific conditions, Kashtan said.

Katherine Pollard, an evolutionary genomicist at the Gladstone Institutes at the University of California, San Francisco, said the study was “an impressive technical feat to get this much data.” Still, Rodríguez-Valera pointed out that the sequences do not include full genomes. “You get pieces of the puzzle, but not the complete puzzle.” Chisholm’s group is now working to compare Prochlorococcus samples from different regions of the world.