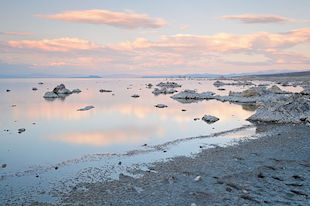 Mono Lake, a haven for salt-loving microbesWIKIMEDIA, KING OF HEARTSIf there’s any hope of finding microbial life that can thrive on Mars or elsewhere in the Solar System, scientists are likely to first find it in extreme environments on Earth. Researchers from Wichita State University in Kansas and colleagues recently discovered that bacteria can survive at high concentrations of perchlorates, salts that were long considered toxic to life. Meanwhile, a team from Louisiana State University in Baton Rouge has identified a type of archaea called Halobacteriales that can “breathe” carbon monoxide in the presence of these strongly oxidizing salts. Both groups presented their unpublished findings last week (June 17) at the American Society for Microbiology’s annual meeting in Boston.

“It’s a pretty good bet that wherever one finds water in an extraterrestrial system, it’s going to be salty,” microbiologist Gary King of Louisiana State, who led the...

Life on Earth requires liquid water. Mars is far too cold and arid for liquid water to exist in abundance on its surface. But perchlorates—which the Phoenix lander and Curiosity rover have found in Martian regolith—could absorb water from the planet’s atmosphere, forming deliquescent brines that might support life.

Scientists have studied microbes that live in extremely salty environments—such as the Great Salt Lake and the Dead Sea—for more than a century. Most of their research has focused on how these organisms survive at high concentrations of sodium chloride, but few have examined whether these organisms can tolerate environments rich in perchlorates.

“People looked at these compounds and thought [microorganisms] wouldn’t be able to survive” in their presence, Mark Schneegurt, a biologist at Wichita State, told The Scientist.

Recently, Schneegurt and colleagues at Wichita State and NASA’s Jet Propulsion Laboratory isolated bacteria from the Great Salt Plains of Oklahoma and Hot Lake in Washington, growing them in perchlorate-rich conditions. Bacillus, Halomonas, Marinococcus, Nesterenkonia, and Planococcus bacteria were all able to survive at 1 percent concentrations of perchlorate, but some even thrived at 10 percent concentrations. This was surprising, since perchlorates are strong oxidizers (used in rocket fuel). It turns out that these compounds are not as caustic in aqueous solutions at room temperature, Schneegurt said.

But these extremophiles don’t stop at tolerating perchlorates. Some archaebacteria actually use them to “breathe” carbon monoxide, a gas that is present at high concentrations in Mars’s atmosphere.

King, working with graduate student Marisa Myers of Louisiana State and their colleagues, harvested Halorubrum str. BV1 from the Bonneville Salt Flats in Utah and Alkalilimnicola ehrlichii MLHE-1 from Mono Lake in California, growing the microbes in a salt-saturated solution of perchlorates, showing that the organisms were able to consume carbon monoxide at very low water potentials (high salt concentrations). Whereas aerobic microbes use oxygen as the electron receptor in metabolism, these microbes were instead using the perchlorate.

“The results are interesting in that they demonstrate that microorganisms can grow in environmental extremes of perchlorate and water activity using CO [carbon monoxide] as an energy source,” John Coates of the University of California, Berkeley, who was not involved in the work, wrote in an email to The Scientist. “This is perhaps not too big a surprise, as microorganisms are known to grow under a very broad range of environmental extremes,” added Coates, who has studied these organisms in the context of toxic spills.

“The interesting aspect of [King and colleagues’] work is that [it] demonstrates that a single organism can grow under several of these extremes simultaneously with CO,” Coates wrote. “This is more a testament to the remarkable adaptability of life on Earth rather than any indication of the existence of extraterrestrial life,” he noted.

Of course, “there hasn’t been conclusive evidence for life on Mars,” added Melanie Mormile of the Missouri University of Science and Technology in Rolla, who studies extremophiles in highly alkaline environments and was not involved in the research. “We have to be very, very careful about extrapolating” from life on Earth, she cautioned.