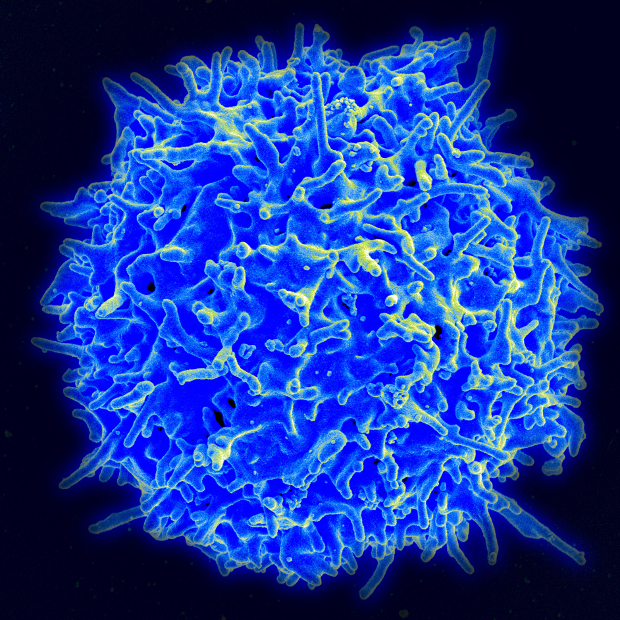 WIKIMEDIA, NIHThe presence of certain types of gut microbes in mice can boost the anti-tumor effects of cancer immunotherapy, according to two studies from independent research teams published today (November 5) in Science.

Cancer immunotherapies that block immune inhibitory pathways are now available as treatments for several tumor types, yet patients’ responses to these therapies vary. Aside from the presence of T cells within the tumor before the start of treatment, it has not been clear what other factors are linked to a response to these antibodies. The two studies published today, while not the first to suggest that gut microbes can influence the efficacy of cancer therapy, provide a definitive link between gut microbiome composition and cancer immunotherapy response and implicate the positive role of specific bacterial species.

“These interesting papers combine two of the hottest areas in science—the microbiome and immunology—showing that gut bacteria can...

“These are beautiful studies that give mechanistic views of how the gut microbiota is critical for regulating the immune system in the context of an immune checkpoint blockade to encourage the immune system in fighting cancer,” agreed Justin Sonnenburg, a microbiome researcher at the Stanford School of Medicine who was also not involved in the research. “The microbiota is connected to our biology in both direct and indirect ways, and these works are adding to the list of how the microbiota is incredibly important for our health.”

Thomas F. Gajewski, a cancer clinician and researcher at the University of Chicago, and his colleagues were interested to understand what leads some cancer patients to have a strong immune response against a tumor—in the form of T cells that infiltrate the tumor. “Differences in immune responses to cancer may be due to genetic variants, differences in the tumor mutations, environmental differences, or a combination of these factors,” explained Gajewski.

To explore the role of the gut microbiome, the researchers studied two groups of the same strain of laboratory mice that had been bred at two different mouse facilities and were known to harbor different commensal bacteria in their GI tracts. When both sets of mice were implanted with melanoma tumors, tumors grew less aggressively in the mice sourced from the Jackson Laboratory (JAX) and these mice had more robust T-cells responses against the tumors. When both mouse groups were housed together, the differences in tumor responses disappeared, leading the researchers to hypothesize that commensal microbes from the JAX mice had colonized the other mouse population, sourced from Taconic Biosciences. Sure enough, a fecal transplant from the JAX mice to the other group resulted in better anti-tumor T-cell responses and slower tumor growth in the Taconic Biosciences group, even when housed separately.

Next, the researchers decided to test the effects of an anti-PD-L1 immunotherapy antibody. The therapy slowed tumor growth to a greater extent in the JAX compared to the Taconic Biosciences mice. Taconic Biosciences mice treated with the antibody had similar tumor control and immune responses to mice who’d received a fecal transplant from the JAX animals, but combining the immunotherapy and the fecal transplant led to greater tumor control.

Sequencing the gut microbiome of the mice, the researchers found that Bifidobacterium species were linked to the anti-tumor immune response and that adding a cocktail of these microbes to the Taconic Biosciences mice with melanoma resulted in the same benefit as the fecal transplant. The team also found that the dendritic cells isolated from either the JAX mice or Bifidobacterium-treated Taconic Biosciences mice are able to better stimulate tumor-specific T cells in vitro.

“These effects of the gut microbiome on the anti-tumor immune response were stronger than we had anticipated,” said Gajewski.

In the second study, led by immunologist Laurence Zitvogel of INSERM in France, researchers found that the effect of treating mice harboring sarcomas, melanoma, or colorectal tumors with another immunotherapy antibody, against CTLA-4, depended on the presence of Bacteroides species; germ-free or antibiotics-treated mice did not enjoy tumor control as a result of the therapy. Adding Bacteroides species to the germ-free and antibiotics treated mice restored the immunotherapy’s anti-tumor benefit. Interestingly, adding murine memory T cells targeting the gut microbes to the mice had the same effect, suggesting that it is the immune system’s response to commensal microbes that readies it to fight tumors.

Analyzing gut microbiome of 25 metastatic melanoma patients, the INSERM researchers also found that some patients had Bacterioides as part of their gut microbiomes and that a fecal transplant from these patients into germ free mice also restored the anti-CTLA-4 therapy’s anti-tumor effects.

“What was quite exciting for us is that using microbes may be a way to improve the efficacy of immunotherapies without increasing their toxic side effects,” said study author Mathias Chamaillard, an immunologist at the Center of Infection and Immunity at the University of Lille in France. Both groups of researchers are now sorting out the details of how the gut microbes stimulate the immune system to act against tumors.

Of course, whether the gut microbial species identified in these mouse studies will have the same effect in people is not clear. “The impact of the gut microbiota is probably different depending on the context,” said Gajewski. “We’re starting to understand that that one type of bacteria is not going to cure everything.”

Correction (November 6): This story has been updated from its original version to correctly name the origin of some of the study animals as Taconic Biosciences, not Taconic Farms. The Scientist regrets the error.