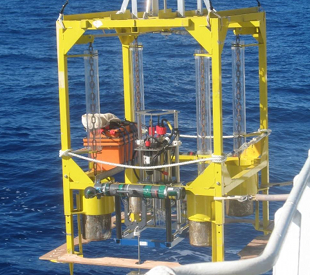 The central part of the autonomous instrument that was deployed to measure the O2 dynamics of the sea-bed in the Mariana Trench at a depth of 11 km. Data documented intensified microbial life in the bottom of the trench as compared to conditions at the surrounding abyssal plains at 6 km water depth.ANNI GLUDEven the deepest spot on the ocean floor supports a vigorous microbial ecosystem, according to new research. An international collaboration found that in the Mariana Trench—nearly 11 kilometers (7 miles) below the surface—microbes easily metabolize the organic matter that falls to this depth, despite enduring 1,000 times more pressure than organisms at sea level. The findings, published today (March 17) in Nature Geoscience, demonstrate that these microbial communities have evolved adaptations to survive—and thrive—under extreme pressure.

The research “shows that microbes are basically able to cope with any conditions on this planet,” said Hans...

Ocean microbes are critical players in the carbon cycle. If organic matter avoids microbial digestion as it falls to the sea floor, and remains undigested, it ultimately turns into fossil fuels. Microbes, by degrading this matter and releasing CO2, keep carbon cycling in the ocean, explained Ronnie Glud, an aquatic biogeochemist at the University of Southern Denmark who led the project. But it’s not well known how efficiently organic particles are broken down at the extreme depths like the bottom of the Mariana Trench in the Western Pacific Ocean.

“We thought maybe these trenches act as traps for organic material. Maybe they are enriched in carbon,” Glud said, which raises the question: “Do we have bacterial communities turning over this carbon?”

But studying such microbes has proven difficult, as it’s nearly impossible to bring up sediment without raising its temperature and de-pressurizing it, which can kill organisms adapted to such conditions. To overcome this obstacle, Glud and his collaborators from Germany and Japan devised instruments to study the organisms in place at the ocean bottom. They recorded oxygen uptake as a proxy for carbon turnover and used a device called a deep-sea lander, equipped with exquisitely sensitive oxygen sensors to take millimeter-wide profiles of oxygen concentrations in the sediment.

The scientists dropped their lander to measure oxygen consumption in the Mariana Trench’s deepest spot, known as Challenger Deep, comparing the readings to a shallower spot—at 6 kilometers (3.6 miles) deep, the lower limit of much of the ocean’s floor—about 35 miles away. They found that Challenger Deep microbes used oxygen at about twice the rate of their shallower counterparts, demonstrating that they have adapted to the extreme pressure.

The researchers also took sediment samples and measured chlorophyll and phaeophytin, photosynthetic pigments found in organic matter that will eventually be metabolized by microorganisms. In the Mariana Trench, the researchers found 4 times as much chlorophyll and more than double the phaeophytin than was measured at the shallower site, despite the microbe’s faster metabolism, suggesting that the organic matter at Challenger Deep is younger. Additionally, higher concentrations of a lead isotope—a sign of sediment settling—suggest that the trench acts as a “trap,” concentrating organic material that reaches the ocean floor.

Though deep-sea trenches only occupy about 2 percent of the ocean floor, “the present study suggests that the small geographical scale of this environment belies its role in global elemental cycles,” wrote geoscientist Daniel Mayor of the University of Aberdeen, who did not participate in the research, in an email to The Scientist. Mayor noted that Challenger Deep’s slightly higher temperature—2.5°C in the  trench versus 1.6°C at the shallower spot—could also be facilitating more microbial activity.

But what microbes are thriving in the Mariana Trench? “It would be the icing on the cake to know which ones are there,” noted marine microbiologist Jennifer Biddle at the University of Delaware, who was not involved in the project. Glud hopes to examine “what makes [deep sea] bacteria so special,” he said, and compare their data to other trenches in areas with richer and poorer nutrient profiles.

In the meantime, the findings “highlight the need for continued exploration to understand the ocean,” Biddle noted. “We’re still finding new and interesting things.”