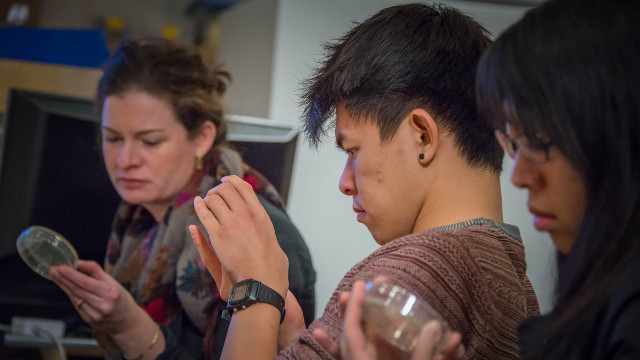 Attendees examine bacterial samples at the “Art and Science of Bacteria” workshop at MIT.ARTS AT MIT, L. BARRY HETHERINGTON

On a cold January afternoon, a group of science students and artists pored over Petri dishes in the MIT Museum Studio, examining the bacteria growing within them. These were not just any bacteria: they were components of the participants’ own microbiomes, which had formed visible colonies in an incubator overnight, thanks to systems biology postdoc Tal Danino.

Danino and artist-in-residence Anicka Yi led a two-day workshop on “The Art and Science of Bacteria” as part of their scientific and artistic collaboration, set up by Meg Rotzel at MIT’s Center for Art, Science, and Technology.

“I wanted to work with bacteria on multiple levels,” Yi told the workshop attendees, describing the inspiration for her work with Danino. In addition to the traditional visual view of colorful colonies growing on...

Danino, who has been manipulating microbes since his graduate school days, recalled his early discussions with Yi on personal microbiome and scents. Yi is using these scents in an upcoming gallery show, “You can call me F,” opening at The Kitchen in New York City on March 5. There, visitors will be immersed in Yi’s interpretation of bacterial samples collected from 100 female art professionals acquainted with Yi. Not only will they see a seven-foot-tall “bacterial billboard,” a giant Petri dish displaying the 100 live samples, but they will also smell synthesized perfume designed by Yi based on the scents of the microbes blended with air sampled from traditionally male-dominated spaces.

“We’re really developing an entirely new art form that revolves around using biological elements,” Danino said. “That’s something that I really loved talking about and sharing at the workshop.”

“It has been incredibly educational and really fun and I also feel like there are just so many possibilities,” Yi said at the MIT workshop.  “Bacteria are a rich material as an idea, but also as the thing itself.”

Looking at bacteria through the lens of art has also inspired his scientific research, Danino said. “A lot of the images that Anicka and I are generating are these really intricate patterns and textures,” he said. “From my perspective as a biologist, I’m really fascinated by those and want to understand them.”

Workshop participants were given their own Petri dish and agar mix to continue their own bacterial explorations at home. “Getting more people excited about science through art is . . . very effective,” Danino said, adding that, hopefully, the medical students, engineers, and poets who attended left with some of Yi’s enthusiasm.

“I’m just living in bacteria these days,” she told the group with glee.

"You can call me F" will be on display at The Kitchen in New York City from March 5 through April 11.