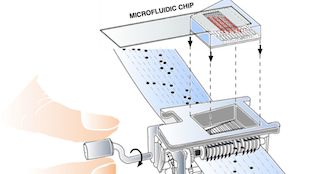 PLOS ONE, G. KORIR AND M. PRAKASHResearchers at Stanford University have designed a new microfluidic device that is powered by hand crank and programmed by paper punch cards, which they described last week (March 4) in PLOS One. Riffs on the device, based on a design for a children’s music box, should allow researchers to create portable, sturdy microfluidic devices for use in the classroom, as well and for diagnostic testing and environmental monitoring in areas with limited access to electricity and trained personnel.

“This paper is the most clever use of an inexpensive programmable toy to produce useful microfluidic systems at low cost,” Paul Yager, a professor of bioengineering at the University of Washington in Seattle who was not involved in the study, wrote in an e-mail to The Scientist. “This has a lot of potential for teaching and for performing processes at low cost...

Manu Prakash, coauthor of the new paper and an assistant professor of bioengineering at Stanford, said that his team’s device manages to have high-tech capabilities despite its relatively low-tech operational requirements. “The tool has exactly the same specs as any of these other microfluidic technologies that are out there that are all automated and run by computers,” Prakash said.

Paper microfluidic devices have been successfully used in low-resource settings, but they lack the sophisticated control of fluids that some polymer-based chips can achieve. Polymer-based chips with pumps, valves, and the ability to produce droplets can run complex assays, but they usually come attached to a computing device and pumps. The new device eliminates the need for these external components.

The new device consists of three main parts: a microfluidic chip made out of the polymer polydimethylsiloxane (PDMS), paper tapes with holes punched in them for programming, and a device that translates the patterns of punches into pumping action, droplet formation, and valve-opening and -closing in the chip.

The researchers based their design in part on the Kikkerland Music Box, a hand-crank toy that plays music based on patterns of hole punches in a paper strip. With the new microfluidic device, as the user turns the hand crank, a paper strip is fed beneath a cylindrical row of discs with teeth. As the teeth catch in holes, the teeth on the other sides of the discs exert pressure on flexible microfluidic channels and flush liquid along them, creating a pumping action. Other teeth cause small valves blocking the channels to open as the discs turn. Alternatively, teeth can pull back a lever that then springs back and hits a channel, causing a droplet of fluid to break off from the larger stream.

The researchers demonstrated the utility of their devices by designing a chip to test pH and levels of ammonia, nitrite, and nitrate in water. They programmed the devices to dispense and mix precise quantities of both their samples and reagents, which change color depending on the presence of specific substances.

There are already other ways to perform these specific assays, noted Ali Yetisen, a postdoctoral fellow at Harvard Medical School and Massachusetts General Hospital. But this latest design may be useful for more complex assays requiring additional chemical mixing steps or more-precise control of droplets of fluid.

“This is a creative [solution] to achieve complex fluid control in a point-of-care microfluidics device,” Samuel Sia, associate professor of biomedical engineering at Columbia University, told The Scientist in an e-mail.

Prakash, who previously distributed 50,000 origami microscopes to people worldwide, hopes that non-professionals will also embrace his new device. Chemistry sets for children have gone out of fashion because they are considered dangerous and because reagents are expensive, he said. Microfluidic devices allow reactions to occur in an enclosed space and only require tiny quantities of reagents, potentially making them an attractive replacement for the educational instruments of yore.

“Punch cards were actually used to program very complex programs in computers,” he said. “We are leveraging that idea to now program chemistry.”