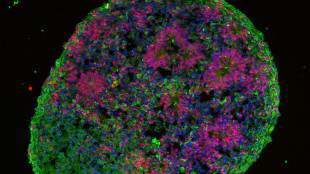 Human brain organoidJESSICA MARIANIAn examination of tiny, brain-like organoids generated from the skin cells of patients with autism spectrum disorder (ASD) suggests that the condition may be associated with an overproduction of inhibitory neurons, among other things. The study, published today (July 16) in Cell, reveals that although the patients’ symptoms arose spontaneously, their brain cells behaved similarly in vitro.

“These are patients with idiopathic autism that do not share any genetic causes, and yet the authors find phenotypes shared between their cells. That’s impressive,” said neuroscientist and stem cell biologist Alysson Muotri of the University of California, San Diego, who was not involved in the study. “If someone had asked me, I would have said, ‘You won’t find anything in common, it’s probably going to be a mixed bag.’ But no . . . there seems to be key things that are dysregulated in all of...

Indeed, “one of the most exciting aspects of the work is that it manages to tackle idiopathic neurological disease,” agreed Magdalena Götz of Ludwig-Maximilians-University Munich, who also did not participate in the research.

ASD is a collection of complex neurodevelopmental disorders that are characterized by social deficits, communication difficulties, repetitive behaviors and, in some instances, cognitive problems. Studies into familial cases of ASD have identified certain genes that confer risk for the disorders, but the majority of cases are idiopathic, meaning their origins are a mystery.

Flora Vaccarino at Yale School of Medicine recognized that induced pluripotent stem cell (iPSC) technology—in which adult cells are reverted to embryonic-like cells and then directed to specific fates—would provide a “unique opportunity” to investigate idiopathic ASD’s obscure roots, she said. “I immediately realized that this could be used to reenact stages of neurodevelopment that were almost impossible to study in humans.”

To this end, her team obtained skin cells from four adolescent male ASD patients and their four biological fathers who do not have ASD. The team then converted these skin cells into iPSCs and subsequently directed them to develop into small cellular aggregates that resembled features of the telencephalon—the embryonic structure from which the brain’s cerebrum develops.

Although these patient- and control-derived organoids shared similar overall structures and electrical activities, there were considerable and reproducible differences in gene expression between ASD mini brains and their non-ASD counterparts during organoid development, explained Vaccarino. ASD patient organoids tended to have upregulated expression of genes involved in cell proliferation, neuronal development, and synapse assembly, she said.

To confirm these results Vaccarino’s team measured the proliferation rates of the organoid cells and found that, at early stages of development, “the cells of the patients divide faster than the fathers’,” said Vaccarino. The team then asked whether some or all neurons increased in number. “That’s when we discovered that the glutamatergic [excitatory] neurons were not affected, but the GABAergic [inhibitory] neurons were increased,” she added.

The team re-examined the gene-expression data to see if there were clues as to why inhibitory neurons were getting a boost. The researchers discovered that among the consistently upregulated transcripts in the patient organoids was the messenger RNA encoding FoxG1—a transcription factor important for telencephalon development. Suppressing the expression of the FoxG1 transcript in patient-derived organoids restored normal inhibitory neuronal numbers.

Exactly how an increase in FoxG1 and inhibitory neurons might lead to ASD is unclear, said Vaccarino, but it’s possible that excess inhibition early in development “is affecting the way neurons connect with each other.”

Beyond pointing to possible mechanisms associated with the development of ASD, the results indicate that patient-derived organoids may be helpful for studying other idiopathic neurological disorders, such as Alzheimer’s disease, amyotrophic lateral sclerosis, or Parkinson’s. “We think that these are very complex disorders and that it is probably very hard to find similar molecular pathways in idiopathic groups,” said Muotri, “but maybe not. . . . This paper offers the perspective that it’s doable.”