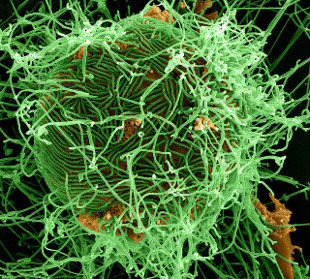 Colorized scanning electron micrograph of filamentous Ebola virus particles (green) attached and budding from a chronically infected VERO E6 cell (orange) (25,000x magnification)FLICKR, NIAIDUsing a novel drug-screening approach, researchers have found more than 50 drugs that show potential as anti-Ebola treatments, according to a study published today (December 17) in Emerging Microbes and Infections. The team used a noninfectious Ebola virus mimic to assess the ability of a large number of drugs to inhibit entry of the viral impostor into human cells. The researchers focused their search on drugs approved by the US Food and Drug Administration (FDA) and those in investigational trials, in the hopes of cutting costs and risks associated with early-stage drug development.

“Looking at approved drugs—especially in the context of an outbreak—and this type of off-list use of potential drugs, is useful,” said Matthew Frieman, a virologist at the University of Maryland...

More than 18,000 people have been infected with Ebola—including nearly 7,000 reported deaths—as part of the ongoing outbreak in West Africa, according to the World Health Organization. Although the Ebola virus was first identified in 1976, drugs to treat the disease have been difficult to develop. The current outbreak has spurred the use of experimental drugs to treat Ebola with some success.

Adolfo García-Sastre, director of the Global Health and Emerging Pathogens Institute at the Icahn School of Medicine at Mount Sinai in New York City, and his colleagues have developed a technique to create a non-infectious version of Ebola virus that has critical external proteins of the pathogenic strain, but only a beta-lactamase reporter protein inside. When the Ebola outbreak hit, Wei Zheng and his team at the US National Institutes of Health’s National Center for Advancing Translational Sciences (NCATS) reached out to García-Sastre to collaboratively adapt the technique for Ebola research.

“This is an assay that only mimics entry so that it can be used to identify inhibitors,” García-Sastre said. “It acts like Ebola, but instead of releasing . . . infectious RNA, this releases reporter proteins.”

Because the virus-like particles (VLPs) developed by the researchers are not pathogenic, they can be studied in biosafety level 2 (BSL2) laboratories instead of the strict BSL4 labs that are cleared to handle wild-type Ebola virus. When the non-infectious VLPs enter a cell, the reporter proteins they release can be tracked to assess how well a drug inhibits entry.

“I was impressed how quickly [the researchers] addressed the issue,” said Gene Olinger, a virologist at the National Institute of Allergy and Infectious Diseases who was not involved in the study. “They developed a whole drug screen in a matter of a few months.”

Of the nearly 3,000 compounds the researchers tested from the NCATS drug library, they identified 53 compounds that showed promise in inhibiting entry of the VLPs into cells, most of which have been approved for use in humans by the FDA. These candidate compounds include several cancer drugs as well as antihistamines, antipsychotics, antibiotics, female fertility drugs, and antimalarial drugs.

“We are now publishing several drugs that are approved in humans that have good potential and that may make an impact on Ebola disease,” García-Sastre said. “Hopefully they can be studied quickly and deployed quickly in humans.”

One challenge is that although this approach has yielded many potential anti-Ebola drugs, it’s not yet clear which—of any—of them will be active against wild-type Ebola virus in vivo. Some of the identified drugs may turn out to have unanticipated side effects in critically ill Ebola patients, further whittling down the list of treatment possibilities.

The researchers only studied drugs that inhibited entry of virus, which García-Sastre noted is but one target. When additional anti-Ebola drugs become available, “we’ll most likely use a cocktail approach,” said Olinger. “It’s a difficult virus to control.”

Still, starting with FDA-approved drugs could cut the time needed to find appropriate treatments compared to shepherding new drugs through the regulatory process. Although it’s difficult to predict exactly how long such approvals might take, repurposing existing drugs is certainly “faster than starting with a novel compound,” said Frieman. “It’s not 10 to 15 years; it’s more like three to four.”