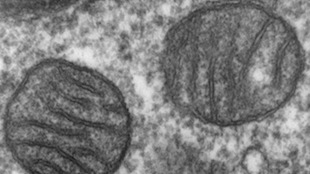 WIKIMEDIA, LOUISA HOWARDScientists have used two methods to generate patient-specific pluripotent stem cells with normal mitochondria for people with defects in these organelles, according to a study published today (July 15) in Nature. The first method generates stem cells for people with some normal mitochondria and some defective ones, a state called heteroplasmy. The researchers isolated fibroblasts from these patients and reprogrammed them to into multiple lines of induced pluripotent stem cells (iPSCs). They then tested these iPSC lines for mitochondrial mutations, selecting cells that had ended up with only nonmutated mitochondria following many cell divisions and mitochondrial redistributions. The second method, which works for patients who have no nonmutated mitochondria, involves transplanting these patients’ cell nuclei into healthy eggs with their own nuclei removed, a process called somatic cell nuclear transfer (SCNT).

“It’s a first step, but we will follow up with further research,” said study...

Mitalipov and his colleagues are still trying to decide which tissues to treat with these new cells, and how to integrate the cells into the body. “I think anyone who is generating reparative stem cells has the same problem, and that is, how do you get them into the body if you are going to use them as cell therapy?” said Michael Teitell, a professor of pediatrics and pathology at University of California, Los Angeles, who was not involved in the study.

Mitalipov’s team previously pioneered a method intended to allow women with mitochondrial diseases to give birth to healthy babies. The researchers hope to transfer the nuclear DNA from eggs of mothers with defective mitochondria into enucleated eggs with healthy mitochondria and are seeking approval from the US Food and Drug Administration to begin clinical trials. But there has not until now been a way to generate patient-specific pluripotent cells to possibly someday treat people who already have mitochondrial diseases.

The researchers also sampled cells from a person with Leigh syndrome who had only mutated mitochondria. They then generated healthy cells through the previously developed SCNT method. The researchers took nuclear DNA from diseased somatic cells and transferred it into healthy eggs. They then stimulated these eggs to behave as though they had been fertilized and to generate pluripotent cells.

Using this method, the researchers were able to generate pluripotent cells containing patient nuclear DNA and donor mitochondria. Researchers have in the past worried that unmatched nuclear DNA and mitochondrial DNA (mtDNA) may cause problems in chimeric cells. Nuclear DNA encodes several genes necessary for mitochondrial function. And mtDNA doesn’t have its own replication and translation machinery—it borrows from the nucleus.

But the SCNT-generated cells showed normal gene expression and metabolic activity, indicating that nuclear-mtDNA mismatch was not a problem.

“They deliberately looked for evidence of incompatibilities . . . and they found none,” said Robin Lovell-Badge, who studies embryonic development at the Francis Crick Institute in London and was not involved in the study. “That’s reassuring for the notion of doing nuclear transfer.”

Going forward, the researchers must determine whether these cells can be used to treat patients. Mitochondrial diseases most commonly affect tissues with high energy demands, Teitell explained. These include the central nervous system and muscles, such as the heart. It remains unclear how one would integrate stem cells into these types of tissues.

“In terms of this particular work deriving pluripotent stem cells, it doesn’t have any immediate clinical implication,” Lovell-Badge said. “It’s going to be difficult to introduce cells in a way that you would help a patient. You’ve got to substantially replace the cells of that patient.”

While researchers wait to see whether the stem cells can be used therapeutically, they may be useful for basic research, Lovell-Badge added. Researchers might compare cells with genetically identical nuclear DNA but varying levels of mutated mtDNA to better understand how the ratio of healthy to unhealthy mitochondria influences cell function, he proposed.