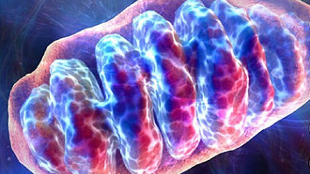 Graphical illustration of a mitochondrionFLICKR, BIOLOGY FLASHCARDSInteractions between the nuclear genome and mitochondrial DNA are essential for proper cellular functioning, but incompatibilities between the two can lead to compromised development and fitness according to research published last month (January 31) in PLOS Genetics.

“The work is most important for its fine dissection of a mito-nuclear interaction and its consequences for phenotypic variation and fitness,” said marine biologist Ron Burton, who wasn’t involved in the study. “These results show that we can't expect to understand mitochondrial diseases by associations with mitochondrial DNA variation alone.”

Despite having their own genomes, mitochondria don’t make many of their own proteins; most are synthesized in the cytosol by cellular equipment encoded in the nucleus. Thus, the interactions of mitochondrial and nuclear DNA are critical to cellular life. But there is some evidence that mutations can disrupt the smooth-running of the interactions, resulting in...

In the new study, Colin Meiklejohn and colleagues worked with Drosophila melanogaster hybrids.  Each hybrid combined one of two different nuclear genomes with one of three types of mitochondrial DNA, making six strains altogether. Five of these six were healthy, but the strain with D. melanogaster OregonR nuclear genes and D. simulans simw501 mitochondrial DNA showed developmental, physiological, and reproductive problems. The researchers had discovered a mitochondrial-nuclear incompatibility, albeit a man-made one.

“The incompatibility is ’artificial’ in the sense that the mitochondrial and nuclear genomes were matched from two sister species of fruit fly - in natural populations they would never naturally occur together,” evolutionary biologist Damian Dowling of Monash University, who didn’t participate in the work, told The Scientist in an email. “It is likely that these incompatibilities do, however, exist in nature, within the same species/populations, and we have some preliminary evidence for such incompatibilities.”

Finding the incompatibility was just the start, though. The researchers were able to use the mitochondrial-disease model they had developed to look for the underlying mechanisms.

Through genetic mapping, Meiklejohn and his colleagues localized the nuclear factor responsible for the incompatibility on chromosome two. Then, by concentrating just on the development delays in the fruit flies, they were able to further narrow the field to a region containing just nine genes: these genes, when combined with the D. simulans mitochondrial DNA, were entirely responsible for the delayed development.

Scouring these nine genes for differences from the compatible genomes, the researchers identified a single gene, which encodes a tyrosine tRNA synthetase, carrying a point mutation that caused a valine to be coded where an alanine should have been. The team also traced the mitochondrial mutation to a single nucleotide polymorphism in the tyrosine tRNA gene.

Neither mutation by itself affected fitness—those fly strains that carried either one were healthy. But having both mutations meant that the synthestase couldn't properly attach tyrosine to the tRNA, and this resulted in disrupted translation.

Biochemical investigations backed up the genetic findings. Analyzing mitochondrial enzymes, the team discovered reduced activity in three OXPHOS complexes, proteins involved in the mitochondrial energy-generating process. And since around 90 percent of a cell’s ATP typically derives from the OXPHOS metabolic pathway, the reduced function means less energy is available for cell growth and development.

The results point to the importance of the mitochondria-nucleus interactions and may inform our understanding of human mitochondrial disorders, about half of which are caused by mitochondrial mutations in tRNA genes. Despite having identified many of these mutations, scientists have found little correlation with disease: different mutations can lead to similar symptoms, while the same mutations can promote very different diseases. And even more puzzling, not everyone with a pathological tRNA mutation becomes ill; some individuals remain healthy. The new research suggests that these inconsistent findings may stem from mitochondrial-nuclear interactions: the nuclear-encoded tRNA synthetase has to be compatible with its associated mitochondrial tRNA for fully functioning protein synthesis.

“If there is natural variation in human populations for the appropriate tRNA synthetase, the disease phenotype might only occur in specific mitonuclear genotypes,” said Burton. “The implications for human mitochondrial medicine are substantial.”