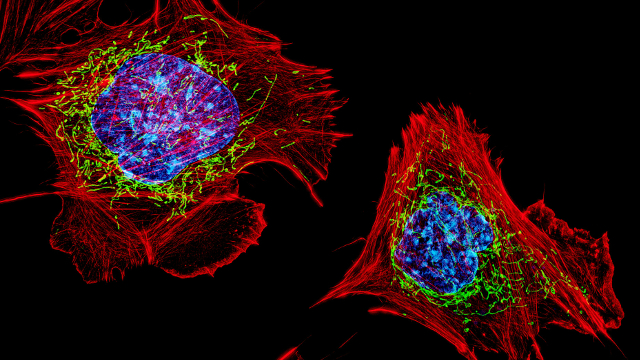 Fibroblast cells with mitochondria shown in greenFLICKR, D. BURNETTE, J. LIPPINCOTT-SCHWARTZ/NICHDSince the 1970s, when researchers turned up similarities between DNA in eukaryotes’ mitochondria and bacterial genomes, scientists have suspected that the organelles descended from symbionts that took up residence within larger cells. A diverse class of bacteria called Alphaproteobacteria soon emerged as a likely candidate for the evolutionary origins of mitochondria. But a new analysis, published today (April 25) in Nature, suggests that mitochondria are at best distant cousins to known alphaproteobacteria lineages, and not descendents as previously thought.

“We are still left hungry for the ancestor of mitochondria,” says Puri Lopez-Garcia, a biologist at the University of Paris-South who was not involved in the study.

While it’s generally agreed that Alphaproteobacteria includes the closest bacterial relatives of mitochondria, that relationship doesn’t reveal much about how mitochondrial ancestors made a living or how they made...

I do find myself with as many questions at the end of reading the paper as I did at the beginning of reading it, probably just different questions.

The question of where on the alphaproteobacteria family tree the mitochondrial ancestor fell has pestered study coauthor Thijs Ettema throughout his scientific career. “Now, with all the available data from all these new lineages in all sorts of environments, we thought we should just do one bold approach and see where this ends up,” says Ettema, an evolutionary biologist at Uppsala University in Sweden.

Much of the genomic data he and colleagues used in their analysis came from the Tara Oceans dataset, which includes metagenomic sequences from microbes in ocean waters sampled from various depths. “For reasons that are not extremely clear . . . it seems that oceanic waters are extremely enriched for Alphaproteobacteria, and not just one species—it seems to be a whole array,” Ettema explains. The datasets were “good and deep enough to make an effort to reconstruct near-complete genomes.”

“They’ve done their analyses well,” says evolutionary biologist Andrew Roger of Dalhousie University in Halifax, Canada, who was not involved in the study. For example, the researchers accounted for the fact that endosymbionts’ genomes tend to get paired down over time, he explains, and they may lose DNA repair enzymes that fix copying errors that put in an A or a T for another nucleotide. If a substitution falls in a spot where it doesn’t change the amino acid sequence coded for by the gene, it’s likely to stick around, and thus the genomes of mitochondria or organisms such as Rickettsiales grow more AT-rich over time—which can make them seem more closely related than they really are.

One step the research team took to counter that bias was to compare not just the genes of Alphaproteobacteria and mitochondria, but the amino acid sequences of the proteins they produced. Indeed, the investigators found no close relationship between mitochondria and Rickettsiales, or, for that matter, any of the other sampled microbes. “Rather, our analyses indicate that mitochondria evolved from a proteobacterial lineage that branched off before the divergence of all sampled alphaproteobacteria,” they write in their paper. 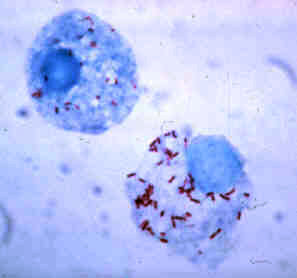 Tick cells infected with Rickettsia rickettsii, which causes Rocky Mountain spotted feverWIKIMEDIA, CDC“I do find myself with as many questions at the end of reading the paper as I did at the beginning of reading it, probably just different questions,” evolutionary biologist James McInerney of the University of Nottingham tells The Scientist. McInerney coauthored a 2006 paper suggesting mitochondria should be grouped with Rickettsiales—an analysis he says was based on available data on Alphaproteobacteria that were much less robust than what exists today. While crediting the authors with a strong analysis, he finds the new study’s outcome unsatisfying. Among the questions left open, he says, is what type of metabolism mitochondrial ancestors had—that is, how did they get their energy?

Another researcher left unsatisfied by the results is Ettema himself. His group plans to continue the search for the long-lost relatives of mitochondria by analyzing samples from non-ocean environments. “It might be that they’re extinct and we’re looking for something that might no longer exist,” he concedes. “Personally, I’m convinced that we’ll find something that will, in the end, be more informative about the origin of mitochondria.”