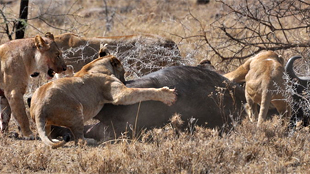 Lions take down a Cape buffaloCaelioFor most of its history, ecology has been dominated by small-scale field work and studies of specific ecosystems. Now, some ecologists are calling upon their peers to think bigger, and to bring the field into the era of Big Science. And it does not come much bigger than computational ecologist Drew Purves’s suggestion of modeling all life on Earth.

Purves, a researcher at Microsoft’s computer science research center in Cambridge, United Kingdom, is building a prototype that simulates entire ecosystems across the planet. Known as the Madingley model, Purves’s simulation captures the life, growth, migration, interactions, and death of individual creatures, and the flow of energy and nutrients between them.

Rather than modeling specific species, the Madingley model places them into broad bins, like carnivore or herbivore, diurnal or nocturnal, birds or mammals. And rather than simulating every individual—an impossibly large...

Purves hopes that this and other “general ecosystem models” (GEMs) will provide a better understanding of how different ecosystems fit together, and how their properties “bubble up from the underlying principles,” he said. They may also help policy-makers to decide how best to conserve our fragile planet, by showing the effects of hunting, invasive species, and changing climates.

It sound ambitious, perhaps unrealistically so. As Bob Paine, a marine biologist from the University of Washington, said, “it’s mission impossible.”  But Purves argues that we have enough data to get started, such as ratios of predators to prey in specific niches, and the metabolic rates and life-spans of many species. “The ecological community has a tendency to assume that it isn’t possible and we want to challenge that,” he said. “You don’t know until you try.”

He points to the climate change community as an example of how big models can change the way research is done. “There was a lot of skepticism about whether there’d be a global climate model just until the first one was built,” he said. Now, such models are the status quo in climate science and regularly feed into the work of the Intergovernmental Panel on Climate Change. Purves hopes his large-scale model will bring the same value to ecology, and recently laid out his views in a comment piece in Nature.  But not everyone is convinced. “I don’t hold big ecology as being terribly useful for solving the world’s problems,” Paine said. “And in a zero-sum financial game, it represents a raid on the national treasury.”

Global models hinge on the interactions between species, Paine argued, and discovering those interactions depends on the small-scale, muddy-boots ecology he has long championed. For example, in the 1960s, Paine coined the concept of a keystone species—one that has a disproportionate influence on its ecosystem—after throwing starfish off a beach and showing that mussels would take over. These interactions are unpredictable, and discovering them “requires intense biological studies, often of single species,” said Paine.

He also rails against the approach of aggregating species into “gross, clumsy units.” Not all birds or carnivores or fliers behave in the same way, he said. Some species of starfish act as keystones but not others, and even those will influence their communities to different degrees depending on what part of the world they are in. Conversely, species from disparate categories can fulfil the same roles. “You can have a big crab in the Pacific that occupies the same niche as a British earthworm,” Paine said. “That’s invisible in the [Madingley] model and takes a lot of work to discover.”

Josh Tewksbury, an ecologist at the Luc Hoffmann Institute in Switzerland takes a more pragmatic view. Although he is pessimistic that Purves’s approach will inform many policy decisions, Tewksbury believes it could promote collaborative data collection and open-access data sharing—areas where ecologists are lagging behind other fields.

“Academic ecologists are a privileged lot,” he said. “We get to follow our ideas and our passions to the most spectacular places on the planet. We might consider spending a bit more time deciding what data we should collect when we go there, and making sure that what we bring back from those adventures is available to all.” And pausing to assess current methodologies doesn’t mean the end of field work, he added. “It may mean we end up doing more of that.”

Purves agrees. He supports small-scale studies, but he thinks that a global perspective will be useful in pinpointing gaps in our knowledge and galvanizing field ecologists to address them. “Again, in the climate community, people are studying topics because those topics have been shown to matter in these large models,” he said. “We hope that we give people a context.”