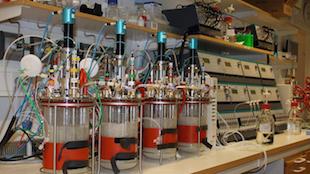 Yeast grow in bioreactorsMARTINA BUTORACBaker’s yeast (Saccharomyces cerevisiae) is used to produce much of the world’s biofuel through the fermentation of sugars and starches into ethanol. But at high concentrations, ethanol is toxic to yeast, as is the heat the microbes produce throughout fermentation. Researchers have discovered cellular mechanisms that can substantially improve yeast’s survival in the presence of heat and alcohol, according to two papers published today (October 2) in Science by separate groups of researchers. These new insights could pave the way for genetically engineering more hardy strains for biofuel production.

Each group independently identified a different process that confers substantially increased tolerance in yeast. “The findings are a little bit unexpected, because we thought it was a complex problem,” said Huimin Zhao, a metabolic engineer and synthetic biologist at the University of Illinois at Urbana-Champaign who was not involved in either study....

“They’re [doing] really good underpinning work,” said Jim McMillan, the chief engineer at the National Renewable Energy Laboratory’s National Bioenergy Center in Golden, Colorado, who also was not involved in the research. “We’ll see how much of it can be leveraged into practical outcomes.”

Increasing alcohol tolerance has been a long-term goal of metabolic engineers, according to MIT’s Gregory Stephanopoulos, a coauthor of the paper on alcohol tolerance. Stephanopoulos and his colleagues started out screening for combinations of mutations that could confer increased tolerance. But it was not until they began to experiment with adding salts to their yeast cultures that they hit upon a single process that could dramatically increase yeast survival in the presence of alcohol.

When the researchers added various potassium salts to their cultures and raised the pH, the yeast produced 80 percent more ethanol. This was because cultures with the salts contained more live yeast, not because individual microbes were being more productive, the researchers showed.

Stephanopoulos’s team hypothesized that adding the salts helps the yeast maintain opposing potassium and proton gradients across their membranes. These gradients are normally disrupted by high ethanol concentrations. Alcohols can puncture these membranes and, as a result, disrupt the yeast’s intracellular pH and potassium concentration.

Because adding large amounts of salt to yeast cultures may not be affordable or practical in an industrial setting, the researchers also engineered yeast to overexpress proton and potassium pumps. This increased ethanol production, but to a lesser extent than adding salts did.

The findings “increase our understanding of what may be happening that makes a compound toxic and another nontoxic,” said Stephanopoulos. “As we understand more about these processes, it will make it easier to devise methods that will allow the microbes to tolerate the toxicity.”

Because researchers are also working to engineer yeast and bacteria that can be used to produce biofuel at higher temperatures, increasing the microbes’ tolerance for ethanol and other alcohols is essential: as temperatures rise, alcohol is increasingly toxic to yeast.

A second group of researchers, led by Jens Nielsen of Chalmers University of Technology in Gothenburg, Sweden, focused on yeast heat tolerance. Currently, yeast are most productive at 30° C (86° F). However, higher temperatures would have many benefits for biofuel production. At present, biofuel producers must use energy to constantly cool down their yeast, since the yeast generate heat as they ferment sugars.

Higher temperatures could also decrease contamination of fermentation tanks by other microbes and speed various enzymatic processes used to break down plants being used for biofuels. This would be particularly beneficial for researchers producing biofuels from lignocellulosic materials, such as prairie grasses and crop waste.

Heating up an organism has multiple effects, from disrupting membranes, to interfering with protein folding and affinities. “It’s very difficult to find out what should be engineered in order to improve the tolerance to higher temperatures,” said Nielsen.

So he and his colleagues decided to challenge three populations of yeast by growing them at around 40° C (104° F) to see if they would evolve mechanisms to tolerate the heat. After several hundred generations, the researchers selected strains from each yeast population and sequenced their genomes.

The chosen yeast showed multiple mutations, but one was shared among all of them: a nonsense mutation at ERG3. This gene encodes the c-5 sterol desaturase enzyme, which is involved in making ergosterol, a molecule that affects the fluidity of cell membranes. The sterol composition of the mutant yeast was different than that of wild-type strains, the researchers found.

The yeast had also accumulated mutations that make it more costly to grow them, so the researchers engineered wild-type strains to have just the ERG3 mutation. These genetically engineered yeast were able to thrive at 40° C.

“It was quite surprising we could nail it down to a single point mutation . . . as the key driver for this adaptation,” said Nielsen.

However, Zhao cautions that even 40° C is a relatively low temperature; temperatures of 50° C (122° F) or 60° C (140° F) would be most desirable, particularly for producing biofuels from lignocellulosic biomass.

It is unlikely that yeast will ever be useful at truly high temperatures above 60° C, according to Zhao. “They are very interesting scientific discoveries,” he said. “We have not solved the real industrial problem yet . . . The temperatures are not high enough. For ethanol tolerance, there is still room for further improvements.”