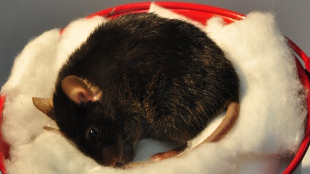 KARIM BENCHENANE, GAETAN DE LAVILLEON, MARIE LACROIX, CNRSMice can recall artificial memories created during sleep once they’re awake, researchers from the French National Center for Scientific Research (CNRS) and their colleagues reported today (March 9) in Nature Neuroscience. The findings support a causal role between the firing of specialized neurons called place cells and the ability of these neurons to represent a particular location in space. Place cells, part of the brain’s “inner GPS,” were first discovered by John O’Keefe, who last year shared the Nobel Prize in Physiology or Medicine.

“This was a fantastic, well-thought-out idea that, miraculously, worked,” said neuroscientist György Buzsáki of the New York University Neuroscience Institute who was not involved with the work. “The study shows that the emotional value of a particular [location] can be modified, and, what is most critical, is that this can happen in a subconscious, sleep state.”...

Karim Benchenane, a neuroscience researcher at CNRS and ESPCI-ParisTech and his colleagues first identified a single place cell in the hippocampus of each mouse that fired when the animal was in a specific location and measured the average time each mouse spent in that location prior to any manipulation.

Then, when that particular place cell became spontaneously active during either an awake or sleep state, an automatic stimulation of the medial forebrain bundle—a part of the brain associated with positive reward sensations—was executed through a brain-computer interface. This stimulation has long been known to result in the release of dopamine neurotransmitters, similar to what happens when the mouse receives a food or some other reward. Each mouse received the stimulation either during an awake or sleeping state, but not both.

This linking of a specific place cell with rewarding stimulation resulted in the animals spending about five times more time in the location associated with the place cell activity compared to the time they spent in that location prior to the stimulation experiment.

When this link between the place cell and reward trigger occurred during sleep in a second set of mice, the animals were more likely to go directly to the location associated with that place cell upon waking.

“The animal developed a goal-directed strategy for the [location], as if the animal had a conscious recollection that there was a reward there,” explained Benchenane.

The activity of place cells during sleep has been previously interpreted as the replay of the places the animal has visited when awake. “Scientists had thought that during sleep, representations of waking experiences get reactivated, and this finding clearly suggests this is the case,” said Kate Jeffery, a behavioral neuroscientist at University College London who was also not involved in the study.

In awake animals, the activity of place cells has been associated with being in a specific location, but so far, it has been difficult to directly attribute place cell activity to a representation of that physical location by the animal’s brain. Focusing on the animal’s place cell activity during sleep, when only replay is active, Benchenane and his colleagues were able to directly link place cell firing to spatial navigation. Their results also provide evidence that the activity of place cells during sleep does indeed convey the same spatial information during an awake state. This is consistent with the idea that recent spatial memories are strengthened during sleep, noted Jeffery.

“This is the first example of memory manipulation during sleep,” said Buzsáki. “The ideas in this study support the probably 100-year-old idea that it is possible to put false memories in the brain.”