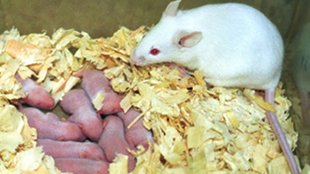 WIKIMEDIA, WHATIGUANAA person’s lifespan may be determined in part before they are even born, if research published today (October 9) in Scientific Reports translates from mice to humans. The new study shows that mitochondrial DNA mutations in the mother’s eggs can shorten her pups’ lives by approximately one third.

“The overriding importance of this kind of work is the demonstration that the mitochondrial DNA, which is maternally inherited, carries the genetic information that can be critical for longevity,” said Douglas Wallace, a professor of pathology and laboratory medicine at the Children’s Hospital of Philadelphia. Wallace was not involved in the new study, but has independently shown that maternally inherited mitochondrial mutations can influence aging, longevity, and cancer.

The new paper follows up on a study published last year in Nature, which showed, among other results, that mutated mitochondrial DNA from mom is sufficient to cause premature aging...

But because of the hurry to publish the novel findings, “what we didn’t know at the time was whether or not their lifespan was going to be affected,” said the Karolinska Institute’s Jaime Ross, lead author of both the Scientific Reports and Nature papers. That would take another year or so of waiting for the animals to die.

Now those results are in. The mice that inherited mutant mitochondrial DNA showed an average lifespan of 100 weeks compared with 141 weeks for control mice. Douglas Turnbull, a professor of neurology at Newcastle University in the U.K. who was not involved in the research, described the result as “interesting but not surprising” because animals that age prematurely would be expected to die young.

What is not yet known is how mitochondrial DNA mutations shorten lifespan. Dysfunctional mitochondria could impair cellular metabolism and lead to a variety of problems, such as the accumulation of damaging reactive oxygen species, reduced vitality of stem cells, and reduced DNA repair, leading to the accumulation of damage to the genome in the nucleus. “Aging is a complex process and involves so many different facets,” said Ross, “so maybe it’s a little bit of everything that together keeps on beating down the organism a little at a time.”

“If, in theory, we were able to measure these mutations, we could say to ourselves, OK, if they get higher than this threshold in the mom’s egg, what can we do about it?” Ross said. “Maybe there are interventions.” Pharmaceutical or nutritional approaches may help, she said, as might three-parent in vitro fertilization—a technique that enables a woman carrying severe disease-causing mitochondrial mutations to avoid passing the disease to her offspring by injecting a nucleus from one of her eggs into a healthy woman’s egg, which carries unaffected mitochondria. The technique is expected to be available in the U.K. in a few years.

As for the rest of us who may worry about the state of the mitochondria we’ve inherited, there is evidence that in mitochondrial mutation-carrying mice prone to premature aging exercise can slow the aging process. “We can change our fate, that’s the good news,” said Ross.