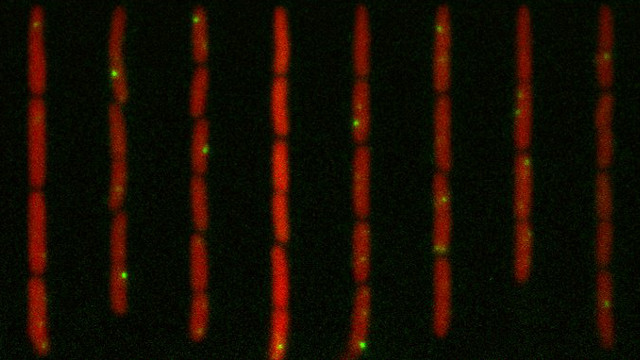 Bacteria in the mother machine showing replication mutationsMARINA ELEZ AND JEAN OLLIONMutations are the driving force for variation and evolution of life, yet most of what is known about mutational dynamics is based on inference from indirect measures. Now, a group of researchers in France have used a microfluidic device that allows the simultaneous observation of hundreds of individual Escherichia coli cells as they divide and mutate over multiple replication cycles. The team reports the findings from the device, called the “mother machine,” in Science today (March 15).

“Mutations are so central to biology,” Martin Ackermann, a molecular microbial ecologist at the Swiss Federal Institute of Technology in Zurich who was not involved in the study, writes in an email to The Scientist. “On one hand, they are the basis of evolutionary innovation and of the diversity of life on our planet. On the other hand, they...

Stephan Uphoff, a bacterial mutagenesis researcher at the University of Oxford who was also not involved in the study, agrees. “It’s an exciting paper,” he says. “It combines new methods with important questions, which are: What are the dynamics of mutagenesis? And what are the fitness effects of mutations?”

One of the common approaches to determining mutation rates during normal bacterial growth is to do a mutation accumulation assay, says Uphoff. To do this, researchers streak a bacterial culture on an agar plate, pick a single colony, streak again, pick again, and so on for twenty days or so. Sequencing and comparing the genomes of the original colony and the final colony can then be used to calculate the number of mutations per generation, he explains.

“The problem with that is [that] the number of samples you can analyze is fairly low,” Uphoff says. Additionally, “there’s a bias in terms of the fitness effects of the mutations,” he says. “You never see the highly deleterious or lethal mutations,” he explains, “because those cells will never grow to form a colony.”

Microbiologist and biophysicist Lydia Robert of the Jean Perrin Laboratory in Paris and colleagues figured out a way to eliminate that bias. “We had this idea that with microfluidics we could keep one cell [after] each division, independent of its fitness, and [thereby] block completely the action of natural selection,” she says. Moreover, the system is high-throughput—per chip, the team could analyze 1,000 individual bacterial cells simultaneously via time-lapse imaging under a microscope.

The device, first developed by Robert and colleagues in 2010, consists of a big channel, through which the broth for growing bacteria flows, and, perpendicular to this, a series of dead-end microchannels, each a micron in diameter—just the right size for a bacterium, says Robert. “They swim inside and get stuck.”

The cells stuck at the end of each channel are the “mother” cells. Their divisions can be continuously observed, while the daughter cells are forced along and out of the microchannels, ultimately being washed away by the flow.

To count the number of mutations occurring, the team used bacteria that express a fluorescently tagged mismatch repair protein that binds to DNA sites of replication errors. Each replication-induced mutation appeared as a bright yellow spot. From these experiments, in which approximately 200 divisions were observed over three days, the team estimated that E. coli mutations occur approximately once every 20 days. They also noted that the mutations tend to occur at a steady pace rather than in bursts.

In separate experiments, the team analyzed the growth phenotypes of the bacteria—again over 200 divisions—and then applied the known mutation rate to calculate the effects on fitness. They determined that 1 percent of mutations were lethal and that the majority of the remaining non-lethal mutations were quasi-neutral, diminishing growth rate by 0.3 percent on average.

The team also examined strains of E. coli prone to higher rates or different types of mutations and found that while more mutations occurred, the strains still exhibited an even-paced frequency with proportionally the same distribution of fitness effects.

“Basically, we see that mutations [tend to be] much more neutral than people had previously thought,” says study coauthor Marina Elez, also of the Jean Perrin Laboratory.

The findings from this study serve as a foundation for examining mutations under a range of conditions, says Uphoff, such as in bacteria with different genetic backgrounds, or in the presence of antibiotics.

What’s more, says Robert, it’s likely that the technology “could be adapted to a lot of different cells,” which would further extend the scope of studying mutational dynamics.

Correction (March 19): The text was altered to clarify that the mother machine was first developed by Lydia Robert and her colleagues in 2010. The Scientist regrets the error.