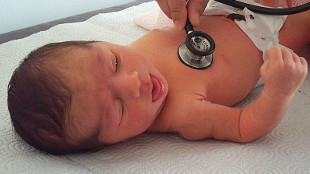 WIKIMEDIA, NEVITAnalyzing blood samples from healthy human fetuses from all three trimester of gestation, researchers have comprehensively mapped the progression of the developing adaptive immune system. The results are published today (February 25) in Science Translational Medicine.

The work expands upon prior studies that surveyed the spectrum of the adaptive immune system in mice and human fetal liver and spleen samples using PCR and sequencing. Two pediatric immunologists, Luigi Notarangelo of Boston Children’s Hospital and Harvard Medical School and Raz Somech of the Sheba Medical Center and Tel Aviv University in Israel, along with their colleagues applied these standard approaches as well as next-generation sequencing to track T- and B-cell development using four different fetal samples taken at 12, 13, 22, and 26 weeks of gestation, as well as samples from healthy, full-term infants. The study is the first to analyze both B and T cell diversity throughout...

“This is a very important study for increasing our fundamental knowledge on how both T and B cell immune diversity develops during fetal development,” Barry Finette, a professor of pediatrics, microbiology, and molecular genetics at the University of Vermont who was not involved in the work, told The Scientist in an e-mail.

“It’s a nice and comprehensive survey using tools not available when I conducted my studies,” said Harry Schroeder, an immunologist at the University of Alabama School of Medicine who was not involved in the study. Schroeder had previously conducted the most extensive analysis of human fetal immune system development.

Fetal blood cannot be sampled from an active pregnancy, making blood samples from healthy fetuses difficult to obtain for studies on the developing immune system. For the present investigation, the researchers used fetal blood samples from women who had undergone in vitro fertilization and had a medically necessary fetal reduction as a result of the implantation of three or more healthy embryos. “The authors were creative in their approach in acquiring these samples, which are very difficult to obtain, especially in quantities for good biologic and molecular studies,” said Finette.

The diversity of the adaptive immune system is in part the result of recombination among three gene segments called variable, diversity, and joining. This scrambling of DNA sequences within and between these segments results in a repertoire of T-cell receptors, necessary for T cell diversity, and a repertoire of immunoglobulin molecules, which give rise to B cell diversity. While different genes are used to generate the T and B cell varieties, the machinery used to produce both is similar, resulting in byproducts of the recombination process called excised T cell receptor excision circles (TRECs) and k receptor excision circles (KRECs).

Both T and B cell population diversity increased from the first to the third trimester with B cell diversity increasing earlier, the researchers found, validating prior evidence that the spectrum of B cells develop earlier than T cells.

There was also evidence of immunoglobulin somatic hypermutation and class switch recombination, which occur when the immune system encounters an antigen. This suggests the womb permits transfer of antigens that may prime the fetal immune responses, said Notarangelo.

“These two mechanisms generate even more immune diversity, and were considered to mainly occur after birth when there is a lot of antigen exposure,” Somech told The Scientist. “We found that this is already starting to occur in the second trimester, possibly because these cells are already seeing antigens.”

“This confirms the predictions by many others that the immune systems diversifies as a consequence of antigen selection at the early stages of fetal development,” said Finette.

Still, the data show that the fetus has a restricted repertoire of both T and B cells, said Schroeder. The fetal immune repertoire focuses on what has been conserved throughout evolution, presumably to avoid immune detection, added Schroeder.

“Human health is dependent on the development of an intact, diversified immune system,” wrote Finette. “Learning how this occurs in utero is central to our understanding these biologic processes and their importance to a number of clinical conditions.”