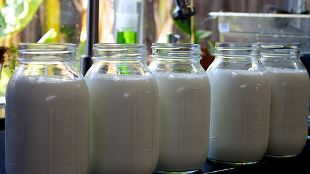 FLICKR, BBUMMost adult mammals can’t digest milk, but humans have evolved lactase persistence—the continued activity of the lactose-digesting enzyme lactase—several times, independently and in different parts of the world, during the last 10,000 years. Evolutionary biologists have proposed several theories to explain the strong selection for lactase persistence among dairy-consuming populations, but to date, none have provided definitive reasoning for the evolution of such an unusual digestive ability.

Analyzing ancient DNA from the skeletal remains of eight late Neolithic Iberian people, scientists now present evidence to suggest that one such hypothesis—that lactase persistence was selected for among early northern Europeans to allow people to drink milk to avoid calcium and vitamin D deficiencies—could not alone explain the rapid rise in lactase persistence across the continent. Their work was published in Molecular Biology and Evolution today (January 22).

“It is likely that the advantage provided to lactase-persistent individuals was not...

Uppsala University’s Oddný Sverrisdóttir and her colleagues tested the so-called calcium assimilation hypothesis by analyzing ancient and modern DNA from individuals who lived in the same area of high sun exposure. UVB light aids in the synthesis of vitamin D, which in turn supports the absorption of calcium, so these people were unlikely to have suffered poor vitamin D and calcium status. The researchers found that none of the eight ancient individuals carried the known European lactase persistence-associated mutation, called -13,910*T. Modern sequence samples from the same sunny region, however, revealed that more than 30 percent of the population do carry -13,910*T, suggesting that at some point in the last 7,000 years, the population acquired lactase persistence despite having sufficient vitamin D and calcium.

So, if not to stave off calcium and vitamin D deficiencies, why might this population have acquired lactase persistence? Sverrisdóttir and her colleagues propose that during crop failure-induced famines, dairy may have been the only reliable source of sustainable nutrition. Those who were lactose intolerant may have fallen ill from consuming milk products, or starved. “We’re talking about the difference between life and death,” Sverrisdóttir said.

Alternatively, Gerbault offered, “it may be the case that migrants from neighboring populations where the allele frequency was higher” brought the trait to the Iberian people.

Gerbault noted that, if anything, the current study raises more questions than it seems to answer. “We know there are different alleles associated with lactase persistence, but we don’t quite know what the selective pressures [were] that provided lactase persistence with a selective advantage,” she said.

Still, Sverrisdóttir said her team’s results sufficiently cast serious doubt on the calcium assimilation hypothesis for lactase persistence in Europe. Evolutionary hypotheses “are so fascinating to coin, but it can be hard to say if it happened or didn’t,” Sverrisdóttir agreed.

O. Ó. Sverrisdóttir et al., “Direct estimates of natural selection in Iberia indicate calcium absorption was not the only driver of lactase persistence in Europe,” Molecular Biology and Evolution, doi:10.1093/molbev/msu049, 2014.