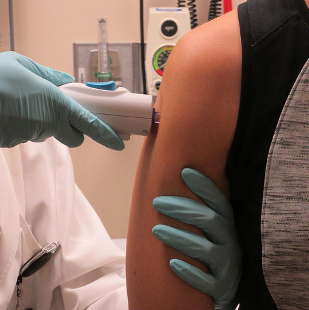 The National Institute of Allergy and Infectious Diseases this week began safety trials for its DNA Zika vaccine.FLICKR, NIAIDScientists studying Zika are moving quickly to generate a vaccine against the mosquito-borne virus that continues to spread through South and Central America and is now encroaching on the continental U.S. In a study published today (August 4) in Science, researchers from Harvard Medical School and the Walter Reed Army Institute of Research in Silver Springs Maryland reported on their tests of three vaccines in Rhesus macaques. It is the first published work to demonstrate the effectiveness of a Zika vaccine in a nonhuman primate model. Each vaccine caused the animals to produce antibody responses to Zika and prevented viremia after subsequent infection.

“They all seem to work, which is encouraging because it probably means in vivo it’s fairly easy to get protection against Zika,” said James Crowe...

The first of the three vaccines tested, consisting of formalin-inactivated viral particles, was produced by HIV vaccine researcher Nelson Michael and his team at Walter Reed. Michael had been unable to test the vaccine until fellow HIV researcher, Dan Barouch of the Center for Virology and Vaccine Research at Beth Israel Deaconess Medical Center at Harvard, developed mouse and Rhesus macaque models of Zika infection. Earlier this summer, the two reported that the inactivated virus and a DNA-based vaccine—encoding for the viral pre-membrane and envelop proteins—both protected mice against Zika.

For the present, nonhuman primate study, the killed vaccine prevented any detectable viral replication blood, urine, cerebral-spinal fluid, and colon and vaginal secretions after infection with Brazilian and Puerto Rican strains of the virus. The researchers were not able to measure viral loads in semen from the animals.

The DNA vaccine and a third vaccine—encoding the pre-membrane and envelop proteins in an adenoviral vector—induced antibody levels similar to the inactivated vaccine and protected macaques against viral replication in blood, the team reported.

The researchers found that protection afforded by the killed virus vaccine was mainly mediated by antibodies. When they transferred immunoglobulin G (IgG) from the plasma of vaccinated monkeys into naïve monkeys, the antibody recipients were also protected from infection. “That means antibodies and vaccines are plausible solutions,” Crowe told The Scientist.

According to Crowe, that antibodies alone are enough to prevent infection is good news because antibodies can travel across the placenta, meaning a vaccine or passive immunization administered to pregnant women might provide protection for developing fetuses. Crowe is working on monoclonal antibody therapy for Zika as a short-term vaccine alternative or prophylaxis for travelers, military personnel, or other individuals still shedding virus.

The antibody work is also valuable, Michael said, because it provides benchmarks for testing the effectiveness of the vaccine in humans. “We know now the level of antibody that we want to look for,” he said. (This fall, he and Barouch plan to begin Phase 1 safety trials of a clinical version of the inactivated virus vaccine, which the Army has agreed to transfer to Sanofi Pasteur for further development.)

The researchers also reported that low levels of antibody did not promote any detectable signs of antibody-dependent enhancement (ADE) of Zika infection, a phenomenon in which sub-neutralizing levels of antibody enhances infection of certain immune cells. ADE occurs in vivo during secondary dengue infection and has been observed between dengue and Zika in vitro. However, Barouch and Michael said the present study was not designed to test for ADE and future work in macaques should address whether ADE between Zika and dengue occurs in vivo.

“This is an active question,” said David O’Connor, a microbiologist at the University of Wisconsin School of Medicine and Public Health in Madison who was not involved in work. “Can you protect from Zika—the answer is unequivocally ‘yes.’” However, he said “I think the equation is going to be more difficult in areas where Zika virus and dengue virus are circulating around.”

According to Michael, the NIAID will sponsor trials on the inactivated vaccine that are designed to test for potential cross-reaction between Zika antibodies and those associated with other flaviviruses. The researchers plan to recruit people with previous exposure to Japanese encephalitis or yellow fever vaccines and conduct safety trials in Puerto Rico, where dengue is endemic.  While he said there is little evidence to suggest such cross reactivity might occur, there is reason to be watchful. “We intend to look very very carefully at these kinds of questions,” he said.