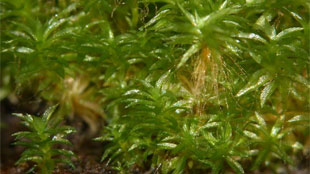 Wikipedia, PirexLand plants emerged around half a billion years ago, having evolved from green aquatic algae. Today, a representative of these early land-dwelling species—a moss—hints that genes from other kingdoms of life may have helped the ancient colonizers flourish on land.

Jinling Huang from East Carolina University studied the genome of the moss Physcomitrella patens and found 128 genes that originated in fungi, bacteria, and viruses, not other plants. The results, published today (23 October) in Nature Communications, suggest that much of P. patens’ genetic material resulted from horizontal gene transfer (HGT), or the movement of genes between species. This phenomenon is common among bacteria and other prokaryotes, but thought to be rare and relatively unimportant in eukaryotes like animals and plants.

“I believe that HGT is more widespread in eukaryotes than generally believed,” said Michael Syvanen, a microbiologist from the University of California, Davis, who...

Jipei Yue, a postdoc in Huang’s lab, scanned the genome of P. patens using a software package called AlienG, designed to detect the signature of HGT. It searched for genes that were more closely related to sequences from other kingdoms of life than to those from other land plants. Yue identified 128 such genes, belonging to 57 different families.

Many of these genes play vital roles—in both this moss and other land plants. Some help to make hormones like auxin that control plant growth. Others synthesise starch and amino acids, or help the plants cope with environmental stress. One large group of enzymes—the subtilases—are involving in defense against disease and drought, the growth of xylems and roots, seed development, and more. “The evidence indicates that these genes are important for plant adaptation to terrestrial environments,” said Huang.

Some scientists are skeptical that the similarities in the genetic sequences of P. patens and the fungi, prokaryotes, and viruses are due to HGT, however. Bill Martin, an evolutionary biologist from Heinrich Heine University of Düsseldorf, said that gene trees are rarely free of error. “If they try hard, I bet they can find genes [that link] mosses with dogs,” said Martin, who did not participate in the research.

Cedric Feschotte from the University of Utah agrees. “I tend to be skeptical about the power of phylogenetic analysis to disclose HGT events that would have taken place so long ago in evolution,” he said. “There's hardly any smoking gun visible at that distance.”

And Thomas Richards, an evolutionary biologist at the Natural History Museum in London, highlights another possible flaw. The chloroplasts in plant cells were once free-living bacteria that swapped genes with many other microbes before transferring thousands of these genes into the genomes of their plant hosts. Many bacterial genes in the moss genome could thus have arrived through this route. “It is very difficult to separate this pattern from bona fide horizontal gene transfer,” said Richards, who also was not involved in the study.

But Huang asserts that his team did “very careful analyses to rule out alternative explanations.” For example, they excluded genes that resembled those from cyanobacteria, the lineage that gave rise to chloroplasts. “There are always alternative explanations, but the overall evidence [shows] that these genes were acquired [directly] from other species,” he said.

Furthermore, 20 of the gene families that allegedly came to the moss via HGT are also found in other land plants, including well-studied species like rice and Arabidopsis. “They are not some idiosyncrasy of the moss genome,” says Syvanen.

Though it may seem strange, Huang suggests a possible mechanism. The earliest land plants evolved when the Earth was bathed with intense ultraviolet radiation, which could have broken the DNA of surrounding organisms into small fragments. Mosses and other early land plants, then, were well-placed to import these fragments. “Mosses are small and have close contact with soil surface,” said Huang. And unlike most other land plants, their spores and early embryos lack protective barriers. “Genes from other sources may have been acquired during these stages.”

And P. patens may still be acquiring new genes from diverse sources. Yue found that 18 families of recently acquired genes in the moss genome that are not found in other sequenced land plants. Feschotte says he is more convinced that these moss-specific genes represent genuine cases of HGT.