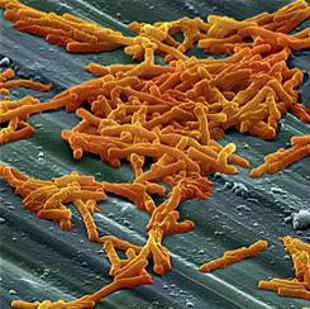 “Environmental C. difficile spores are highly transmissible for long periods after they are shed, commonly transmit within a local environment but also have the potential to spread rapidly over long distances,” the authors wrote in their paper.WIKIMEDIA, CJC2NDMicrobes thrive in nearly every Earthly environment, but surprisingly few are known to flourish when grown in labs. As a result, studies of the human gut microbiome have primarily utilized genomic approaches. By combining microbial culture experiments with genomic approaches, researchers from Wellcome Trust Sanger Institute and their colleagues have now shown that, contrary to the widely held assumption that most bacteria are “unculturable,” most known gut microbial species can be grown and preserved in vitro. The results, published today (May 4) in Nature, reveal that many “unculturable” gut bacteria belong to novel groups, and nearly 60 percent  of them form spores in order to survive...

“This is really an excellent study, it covers all the bases and makes an important contribution,” said James Oliver, a professor of microbiology at the University of North Carolina at Charlotte, who was not involved with the study.

To assess how much of the human gut microbiota could be cultured, the Sanger Institute’s Trevor Lawley and colleagues began with fresh fecal samples from six healthy individuals. The researchers sequenced the samples to identify bacterial diversity, grew bacteria from the samples on plates containing a broad-range growth medium called YCFA, and then compared the genomic data from the original samples to that from species that grew in the petri dishes. The two shared 72 percent of their genomic sequences, and sequences from the cultured bacterial colonies represented 39 percent of the genes present in a larger database of gut microbiomes of 318 individuals, the team reported. But the researchers found that to match the species detection levels possible by sequencing a fecal sample directly, more than 8 million bacterial colonies would have to be picked off plates.

“The metagenomic, non-culture–based methods and culture-based methods matched up very nicely,” Oliver said. “I’ve never heard of that happening before in a natural population.”

Oliver added that these methods have been applied in other natural environments, such as oceans and soils, with very different results. “People are always using molecular methods because the culture-based methods show such a small percentage of the total population,” he said.

Overall, the team isolated 137 distinct species, 90 of which were on the Human Microbiome Project’s “most wanted” list of previously uncultured and unsequenced microbes. Collectively, the bacterial colonies the researchers isolated and preserved represent 90 percent of the bacterial population identified across the six study participants. “Before this, the common dogma has been that you can only culture 1 [percent] to 5 percent of the microbiota,” said Lawley. “But what we claim is that you can actually culture the vast majority of it.”

Based on genomic data suggesting that many species in the gut microbial community sporulate in order to survive outside the body, Lawley’s team killed viable bacteria and found that several species—both commensal and pathogenic—survived the treatment by forming spores. These spores germinated only in the presence of human bile acids, suggesting that gut bacteria rely on sporulation to survive when being transmitted between individuals, and on bile acids as a “colonization cue” to grow within the gut. These spore-forming species represent 30 percent of the total intestinal microbiota, the researchers estimated.

Previous studies on human gut microbiota have been “largely sequence-based,” Lawley said. “In my view, that’s plateaued our advancement in the field. You can get a list of species but can’t experiment with them. This breakthrough actually allows us to go on and do functional work, and validate sequence-based observations.”

The results “will allow representative lab studies” of the functions and interactions of various gut microbes, noted Oliver. Characterizing the roles of specific bacterial species could help improve therapies such as fecal microbiota transplants for Clostridium difficile infections and other disorders, he added.

Overall, the findings are “supremely interesting and potentially important,” said Slava Epstein, a Northeastern University microbiologist who was not involved with the work. “It challenges how microbial cultivation is being done, offering a lot of hope—if, of course, the reported success is replicated in further studies.”