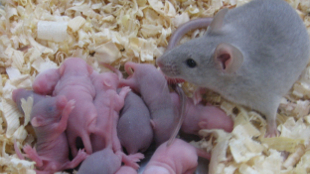 Pups from oocytes made with iPSCs. Female offspring were fully fertile. Credit: Katsuhiko HayashiNew spermatozoa are seldom in short supply, but oocytes—immature egg cells—are much rarer, which has made the quest to generate oocytes from stem cells as challenging as it is important. Now, Japanese researchers claim to have succeeded in coaxing embryonic and adult stem cells from female mice into becoming fully functional oocytes capable of producing viable offspring via in vitro fertilization.

The study, published today (October 4) in Science, could pave the way for a more detailed characterisation of female germ line development. It could also help to save endangered species and may open new leads for treating human infertility.

“It’s a beautiful study, a tour de force,” said David Albertini, a physiologist at the University of Kansas Medical Centre, who was not involved in the study. “It’s the first clear demonstration...

“I think the importance is two-fold,” said Renee Reijo Pera, director of the Centre for Human Embryonic Stem Cell Research and Education at Stanford University, who was not involved in the study. “One is that if this can be extended to other species, it could be important for endangered species. The other is for women. There are a number of groups that have been working on this because it’s so important—and now this group [in Japan] has really broken through to show that what the field has been working on is quite valid.”

Mammalian germ cell lineages begin with primordial germ cells (PGCs), which generate spermatozoa in males and oocytes in females. Last year, Mitinori Saitou and colleagues at the Institute for Integrated Cell-Material Science at Kyoto University in Japan showed that ESCs and iPSCs from male mic could be turned into primordial germ cell-like cells (PGCLCs) that become viable spermatozoa. Saitou wanted to see if they could repeat the trick to produce eggs, transforming stem cells into PGCLCs that could later become oocyte precursors, which are far less abundant in nature than precursors for spermatozoa.

Starting out with ESCs and iPSCs from female mice, they tinkered with a few genes to induce epiblast-like cells (epiLCs) and then PGCLCs. They then aggregated those cells with embryonic gonadal somatic cells, which support the development of germ cells, to create "reconstituted ovaries" in vitro. The PGCLCs proliferated well, progressing similarly to PGCs in embryonic ovaries, and showed meiotic potential.

Next, they transplanted reconstituted ovaries into living mice to encourage oogenesis. After 4 weeks and 4 days, the ovaries showed clear signs of producing oocytes. Histological sections revealed that donor cells contributed to oocyte-like cells, and that almost all matured normally.

Though they did display some differences compared to wild-type oocytes, PGCLC-derived oocytes developed into two-cell embryos with similar efficiency to those from other sources. And when the embryos were transferred to foster mothers, the Japanese team reported the production of pups that grew into seemingly normal adult mice.

That breakthrough could have implications for the treatment of infertility in women, noted Reijo Pera. “Obviously, it has importance if it can be translated to humans, because the oocyte is in very short supply in many women,” she said.

Albertini was more cautious. “This is a major accomplishment for the basic scientist,” he said. “We could use this technique to generate models that could be very useful for indirectly addressing questions relevant to human biology. And it will expand the repertoire of utility for mouse models in the field of infertility treatments. But I don’t think it will have an immediate impact in terms of treating human infertility.”

He pointed out that the properties of mouse and human stem cells are very different, and that we simply don’t yet have the same knowledge of human cells. “The plasticity and utility of mouse ESCs has been very difficult to replicate with human ESCs, for example, so moving cells along a particular pathway of differentiation, in this case toward oogenesis, is going to be a lot more difficult with human stem cells.”