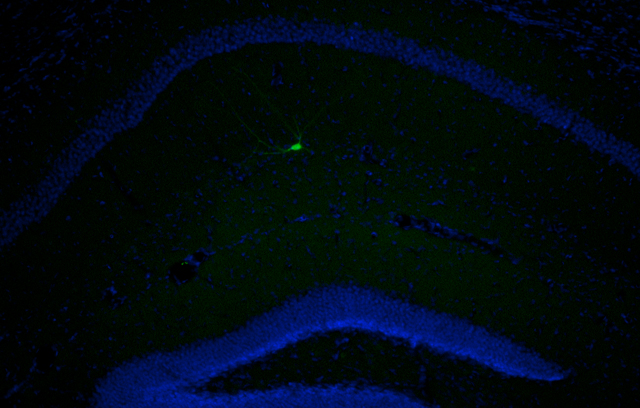 A hippocampal cell expresses a mobilized, GFP-tagged LINE-1 element (green). All nuclei are in blue.SALK INSTITUTESome mouse mothers groom, lick, and nurse their babies more than others. In a study published in Science today (March 23), researchers demonstrate that this natural variation in maternal behavior is linked to the structure of pups’ genomes, specifically, the activation of one of the most common jumping genes in the genome, LINE-1.

“What’s fascinating about the paper is the connection between experience, epigenetics, and restructuring of the genome,” says Moshe Szyf, a geneticist at McGill University in Montreal who did not participate in the work. “We usually think about epigenetics changes that don’t change the sequence, but here there was a connection of the maternal care, the change in methylation . . . and then restructuring.”

Coauthor Tracy Bedrosian, who did the work as a postdoc at the Salk...

Pups raised by attentive mothers had fewer copies of L1 in the hippocampal neurons compared to pups whose moms didn’t give as much attention.

To find out, the researchers observed mouse mothers and recorded how long they groomed, licked, and nursed their pups during defined time windows over a two-week period. Then they isolated heart, hippocampus, and frontal cortex cells from the pups and counted the number of L1 copies in the genomes.

Pups raised by attentive mothers had fewer copies of L1 in the hippocampal neurons compared to pups whose moms didn’t give as much attention. The team found no copy number differences in L1 in the heart or frontal cortex. Furthermore, L1 copy number was similar among the parents, suggesting that L1 copy number variation is not inherited. Maternal care predicted L1 copy number in the pups’ hippocampi, the research showed, even when foster mothers raised the young.

Bedrosian and her colleagues then showed that a transcription factor binding site within the L1 promoter was less methylated in the hippocampi of the pups that received less maternal care. These pups also had correspondingly low expression levels of the gene encoding a DNA methyltransferase. The researchers write in the study that the variability in the methylating enzyme and corresponding L1 promoter methylation, lower levels of which lead to L1 mobilization, are probably only part of the mechanism that connects maternal care to genome structure.

“Licking-grooming is very much tactile stimulation, but nursing you get into more than just physical stimulation,” explains James Curley, a behavioral scientist at the University of Texas at Austin who did not participate in the study. He says that knowing which of the maternal care behaviors are required will help begin to address the broader issues of why these retrotransposon changes happen and what kind of adaptive benefit they confer.

“The million dollar question is to figure out what is the functional relevance of these retrotransposons jumping around in the brain,” agrees Bedrosian. “Is this actually doing anything that affects the animals’ behavior or their fitness or adaptation?”

“From the maternal signal to the actual molecular mechanism is going to be fascinating to work out, and it’s going to take us to multiple candidates beyond retrotransposons,” predicts Michael Meany, a neuroscientist at McGill who was not involved in the work. “The bottom line is that it implies that separation of gene and environment is just a fool’s errand completely. These are clearly interactive forces.”