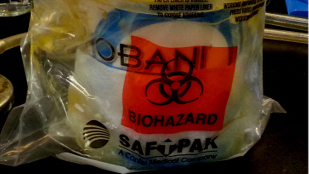 MBIO, SOO CHAN LEE ET AL.A fungus contaminating yogurt containers led to a voluntary recall of certain Chobani products in September 2013. The mold made headlines again last week, when several news outlets reported on a July 8 mBio study in which researchers described a particularly virulent subspecies of Mucor circinelloides isolated from a container of yogurt that was part of the recall.

Joseph Heitman of Duke University in North Carolina and his colleagues analyzed the genome sequence and disease-causing potential of this subspecies of this mold, known as M. circinelloides f. circinelloides, which the researchers dubbed “Mucho” in their paper.

In the researchers’ animal model of infection, Mucho fed to mice did not trigger symptoms like diarrhea or weight loss. But when injected into the bloodstream, the mold caused significant weight loss in some animals. Testing the strain’s interaction with human immune cells, the researchers found that Mucho...

“This is the first time we have seen Mucor contamination on food, and [it is a] potential link to the gastrointestinal tract discomfort that consumers complained [about]” last year, study coauthor Soo Chan Lee told The Scientist.

Although the researchers described the strain as being from a “foodborne fungal pathogen outbreak,” some scientists are less convinced. Food mycologist Hassan Gourama of Pennsylvania State University called the work, simply, “an interesting academic investigation.”

The single sample the researchers tested for this study was sent to them by a couple in Texas who reported severe nausea and diarrhea after consuming a casserole that contained the yogurt. In a note accompanying the paper, the couple reported that they saw no visible signs of mold while cooking or eating the food, and said that none of the yogurt was eaten raw. Approximately five days later, the couple checked the carton, which they had stored in their refrigerator, and noticed “the foul odor and copious mold growing in the container.”

The Duke team “got the container, but didn’t mention how it was stored, [or] the history between when it was opened and when these samples were taken,” said Gourama.

Sample prep issues aside, Gourama said he was also unconvinced by the team’s tests on animal models. “If you inject a million spores of any fungus into the bloodstream, you will see some effects,” he explained, especially in susceptible individuals. “In order to associate something as a foodborne pathogen, you have to simulate what happened naturally with the consumers.”

But not all foodborne illnesses in humans can be mimicked in animals. “It’s not surprising that the gastrointestinal model [of infection] didn’t work,” said microbiologist Haley Oliver of Purdue University, who studies foodborne Listeria outbreaks. “We see the same thing in a mouse model of listeriosis, because mice don’t have the same intestinal receptor that humans do.” Oliver stressed the need to test Mucor’s potential virulence in other models, such as gerbils or guinea pigs.

Since the September 2013 recall, the US Food and Drug Administration (FDA) has received more than 400 reports of illness from consumers related to the recalled yogurt. But the complaints “do not represent any conclusion about whether the product actually caused the adverse events,” an FDA press officer told The Scientist in an e-mail.

Routine tests conducted at Chobani’s Idaho manufacturing facility by the state’s Department of Agriculture in July 2013 noted surface defects and a “yeast-like growth in the samples,” according to an FDA investigation into the September recall. During the September FDA investigation, the agency also reported the presence of M. circinelloides and yeast at the facility. The Duke team did not compare this strain to the mold identified in its sample.

The conclusions of the mBio paper are “kind of a big leap,” said Oliver in an e-mail. If no other isolates have been investigated, "one sample from yogurt, without a clinical isolate from the couple in Texas, has limits, epidemiologically."